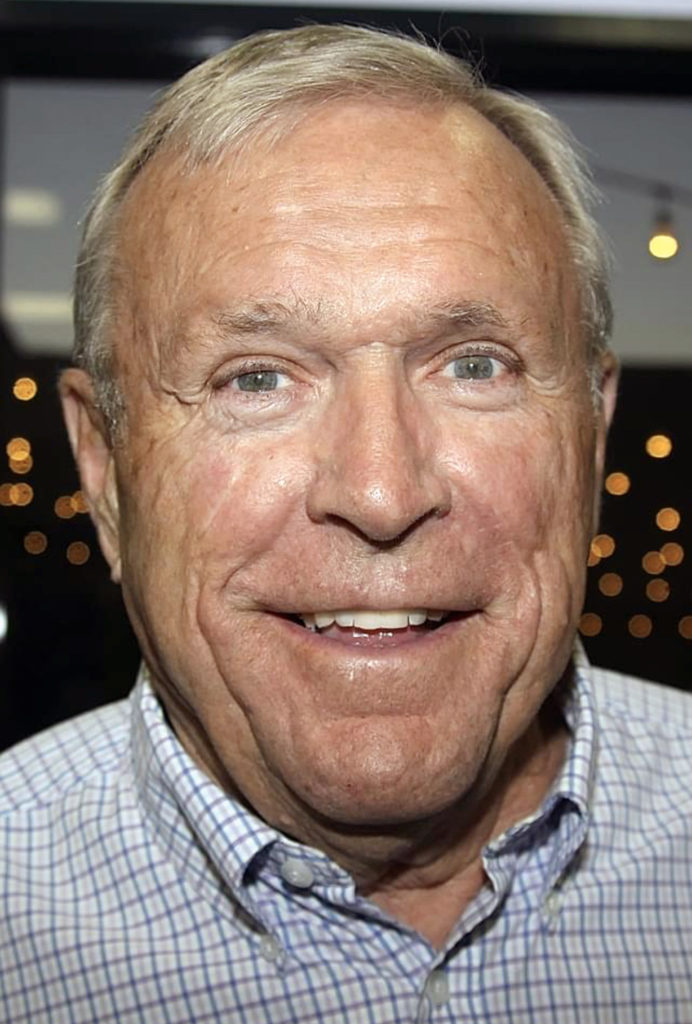 Roger was born on 1/24/32 in Minnesota.  His mother died when he was very young and he and his sister Janet, were adopted and raised by his grandparents, Olaf and Emily.  He moved to California when he was a child and was raised in Huntington Park.  He attended Huntington Park High School where he met his high school sweetheart and future wife, Joan.  He played sports (football and shotput) in high school and won numerous awards.  He became a USC Trojan, played football for them, played for them in the 1951 Rose Bowl and received his Bachelor of Science and master’s degrees. He remained a die-hard Trojan his entire life.  Roger went on to spend 3 years as a pilot in the US Air Force from which he was honorably discharged as a First Lieutenant.

Roger married Joan in 1952 and they raised 2 children, Debbie and Ron, in Anaheim, CA.  While the kids were small, Roger taught and coached in the LA Unified School District at Roosevelt High School and University High, where he had several members of the Jackson 5 as students and was the football coach for Heisman trophy winner Mike Garrett. While teaching and coaching, he also worked summers at Disneyland and was a member of the Order of the Red Handkerchief (the oldest continuously operating employee club of Disneyland which started in 1956 when the men on the Mine Train would go to the local watering hole to cool down after the ride was closed for the night).  In the early 70’s, he started working in administration in the Garden Grove Unified School District. He was the principal of Bolsa Grande High School and then went on to head the adult education program for the entire district. He was President of ACSA Region 17 from 1978 – 1979 and was named the Administrator of the Year Adult Education by the Association of California School Administrators.  In 1988, he married Sharon, the second love of his life.  He retired in 1992 and was able to travel the world with Sharon, his sister Janet and her husband Paul.  After Sharon passed away in 2002, Roger began a relationship with Gail, who became his fiancé.  Although they never married, their love remained strong to the end.

Roger was fiercely independent, living on his own and still driving himself at the age of 90.  Most of his time was spent caring and doing for others.  He loved to watch any sporting event on TV, but football was his favorite.  He spent many Sunday mornings going to church and then watching football with his family.  These were joyous days for him.  He passed away on January 25, 2022, the day after his 90th birthday, after suffering a fall at home 3 days prior.  He was surrounded in love by his family both in person and virtually.  No words or expressions of love or devotion were left unsaid.

Roger is survived by his daughter Debbie, her husband Bruce and their 3 adult children, Brian, Cody and Dallas; his son Ron, his wife Marie, their adult children, Ashley, her husband Garrett and their children Reese and Easton (in utero) and Justin, his wife Kaitlin and their children Emma, Maisie and Daxon; his fiancé Gail; his ex-wife Joan and his ex-sister-in-law Donna.  He loved his family dearly and cherished every moment he spent with them.  He loved nothing more than talking to his grandchildren and great-grandchildren to find out what was going on in their lives and making sure they were happy.  They gave him eternal joy and he was extremely proud of each one of them, their accomplishments and the kind, loving and generous people they are.

Roger was a man of strong and unwavering faith. He loved the Lord without reservation and committed his life to Him.  He was dedicated to Saddleback Church, his family and his friends.  Everyone who met Roger loved him and he left a lasting impression on their lives.  Everywhere he went, far and near, Roger would run into people he knew and they would always sit down for a long chat and to reminisce.  Although we who stay behind will miss this amazing man every day of our lives, we are comforted by the undeniable certainty that Roger, as a devoted servant of God, is rejoicing in his well-deserved eternity in the house of our Lord surrounded by Jesus Christ and all of his loved ones who have gone before him.  He knew in his heart and soul that this was his destiny and worked every day of his Earthly life to earn his place in Heaven.

The celebration of Roger’s life will take place on Saturday, February 26, 2022, at 10:00 a.m. at Saddleback Church, 1 Saddleback Parkway, Lake Forest, CA 92630.  Reception to follow.  Please feel free to join us as we celebrate Roger and the incredible life he enjoyed.  In lieu of flowers, please send donations to the American Cancer Society in the name of Sharon Braasch.