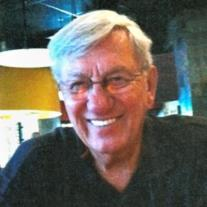 Raised in West Palm Beach, FL and graduated from U of Florida in 1954 with a BSME degree, he spent 35 years in Aerospace. He retired from Rockwell International in 1991 as Director of Advanced Launch System.

His career focused on Propulsion and Power Systems resulting from early assignments at North American Aviation, as test conductor and launch controller for Hound Dog and NAVAHO missiles. This prepared him in the 1960s at ‘the Cape’ to lead Engineering/Propulsion groups working on Mercury, Gemini, Apollo and Saturn test and launch programs. As part of the Rockwell Space Division team, he was a true ‘rocket Pioneer’: an important participant in the most thrilling, spectacular and innovative times of the US Space Program. In the 1970s he joined Rockwell Management on the new Space Shuttle program becoming a leader in the Propulsion group responsible for the powerful Saturn SII engines that thrust the Shuttle into near orbit. In 1982 he received a NASA Public Service Award acknowledging his ‘Unusually Significant Engineering Contributions for US Space Exploration’.

Travel, tennis beach living, the Florida Gators and a 2001 Saab convertible were his joys in retirement.

O’Connor Mortuary handled arrangements and his ashes will be scattered in the ocean near his beloved Florida beach cottage.

1 responses to Roger A. Burg