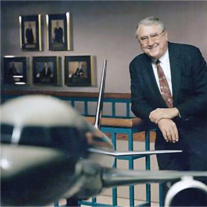 Rod was born and raised in Sullivan County, Indiana the oldest of 6 children to Gene and Irene Smallwood. He graduated Union High School before enlisting in the Marine Corp at 17 years of age. He spent 14 months in Okinawa, Japan during his tour of duty and was honorably discharged 3 years later as a Sargent. In the fall of 1957, he headed to Indianapolis to attend Butler University. While playing on a football scholarship there, he was hospitalized with an injured shoulder; it is there he met his wife, Evelyn. He often said, “This pretty nurse took care of me and I fell in love.”

A short time later, he started working part time at United Parcel Service, delivering packages and continued to work there for 33 years when he retired as Vice President of Air Operations in 1992. Those years were busy; they were making their home in many different states (7 to be exact) and were raising their daughters Carrie and Connie. When it was time to retire they decided to return to the west coast and settled in Incline Village, Nevada. He was able to enjoy his retirement with his 5 grandchildren, playing golf and traveling.

While still at UPS, Rod became involved with non-profit organizations and spent many years working with philanthropies that he and Evelyn were passionate about. His work with these charities continued until the time of his death. He served as a board member for a number of organizations including Sierra Nevada College and was an original board member of The Parasol Tahoe Community Foundation.

He is survived by his wife of 58 years, Evelyn; daughter Connie (Dan) Mueller; sisters Clara Eccles, Penny (Larry) Reynolds, Pamela Smallwood; Grandchildren Keith Prante, Sarah Prante, Luke Mueller, Andrew Mueller and Caitlin Mueller. He was preceded in death by his daughter, Carrie Prante.
Rod will be remembered as a man who loved his family deeply and was generous to those in need. His generous heart and tall stature will be missed greatly by all who knew him.

A celebration of Rod’s life will be held at 2:00 pm on Saturday, September 16th at Crossline Community Church at 23331 Moulton Parkway, Laguna Hills, CA 92653

In lieu of flowers or gifts, the family is requesting that donations be made in honor of Rod’s memory to:
The Parasol Tahoe Community Foundation https://www.parasol.org