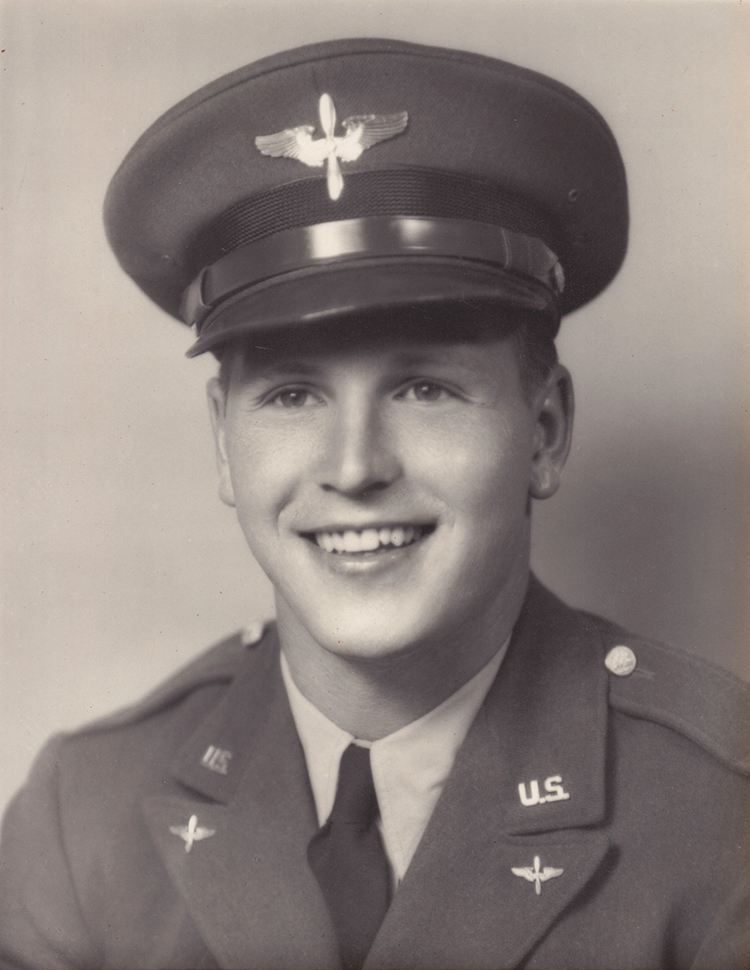 Robert William Thomas, born in Brooklyn, New York on March 31, 1921 attended the New York Military Academy. At a very young age, his family moved to Los Angeles where he attended Hollywood High. He completed high school at Dewitt Academy in the Washington, D.C. area. He was the senior cadet officer at Dewitt when the Japanese attacked Pearl Harbor.

He immediately enlisted and qualified for flight training at Marfa Field, Texas. Upon graduation and certification as a pilot, Dad was assigned to the 307th Heavy Bomb Group which became part of the 13th Air Force aka “The Cactus Air Force”, in the Pacific Theater. A member of the 370th Squadron, he was sent to Guadalcanal in March 1943. As the lead aircraft, Dad piloted his B-24 Liberator as part of a two-squadron formation on the first daylight heavy bomber raid on the Japanese Fortress on the Truk Atoll, March 29,1944. For this daring mission, he received the Distinguished Flying Cross! The target, beyond fighter escort range, demanded a bold and daring daylight raid against a very heavily guarded Japanese fighter base and naval installation. Japanese fighter interdiction was a given.

Other awards our father received were the Air Medal with 11 Oak Leaf Clusters, the Presidential Unit Citation with one Oak Leaf Cluster, the Asiatic Pacific Theater Ribbon with 5 Bronze Stars and the World War II Victory Ribbon. Part of the citation for the Truk mission read, “that as a result of his expert piloting and precision close formation flying, Captain Thomas’ plane and the other aircrafts in these two squadrons faced continuous intense anti-aircraft fire and attacks from at least 75 Japanese fighters. These squadrons in this specific mission were credited with inflicting the most damage of any heavy bomber mission up to this point in the war and it included the destruction of 31 enemy fighters in the air, Dad’s aircraft was given credit for shooting down 4 zeros and 7 other “probables” in that raid. When he returned from his first year overseas not long after this mission, dad was credited with over 1500 hours in the air, over 70 total missions and the destruction of 11 Japanese aircraft, he had only graduated from Primary Flight Training on October 28, 1942! He returned home after this first tour as the pilot for Major General Hubert Harmon, US Army, Commanding Officer 13th Air Force. He continued to serve in that capacity for 9 months. He was then sent to Maxwell Field where he was certified as a B-29 pilot. He later became a B-29 pilot instructor. It was his hope to become a “twofer” which designates a person as having two combat tours against the Japanese. “Captain Bob” certainly contributed to a very long and proud military service tradition within our family. His father had served with General “Blackjack” Pershing first along the Mexican border chasing Poncho Villa and later in WWI in Europe. Other members of the family served the Union in the Civil War and still others in the US Revolutionary War.

After receiving an honorable discharge in 1945, he attended the University of Southern California, earning a degree in Civil Engineering in 2 ½ years while living with his mother in the Los Angeles area. He was an honorary Trojan Knight and a member of Sigma Phi Epsilon Fraternity.  At USC, he was fortunate to meet and marry Marie Marcia McLoughlin of Oxnard, Ventura County, who was also a student at USC. She earned her teaching and master’s degree in Education and went to work in Camarillo upon graduation.

“Captain” Bob began his career in the heating and air conditioning, HVAC field working in sales and marketing. Dad retired from York International, and had worked also  at the Trane Corp. Some of the largest projects in world from the late forties to the late eighties were won by our father such as the Houston Astrodome, Cape Canaveral, the Los Angeles International Airport and the Twin Towers of World Trade Center to name just a very few.

Bob and Marie were blessed with 5 children, thier eldest, a son Craig Steven, followed by four daughters: Marcia Marie, Mary Victoria, Maureen Maxwell and Cynthia Jane. Over their 72 plus years of marriage, thier family grew to 10 grandchildren and 21 great grandchildren. Their Roman Catholic faith was the core element in their family life.

They had been generous with their time both socially and philanthropically. Dad’s passion for gardening and Mom’s gift for decorating created lovely homes making each one a welcoming central hub for our family. Traveling extensively over the years, Bob and Marie made countless, lifelong friendships which hallmarked his 99 ½ years of life. He died peacefully at home and is now both celebrated and greatly missed by us all. We look forward to being united with him one day in Heaven.