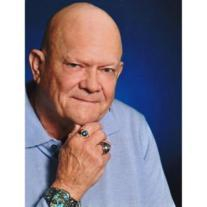 Robert Thomas Mires, 77, of Mission Viejo, California died peacefully at home on July 15 with his wife of almost 40 years by his side. He loved God, his country, family and friends, and he loved life! He was born in Texas on November 24, 1934. He moved to California in the early 1960s to go to work in the aerospace industry as an electrical engineer. He worked at Douglas Aircraft on the Skybolt and Thor projects and then went to North American Aviation where he helped put the man on the moon and retired from Boeing working on the Shuttle program.

He earned his Bachelor’s Degree from Cal State Long Beach and while preparing to retire, he took night classes at UC Irvine and earned his credentials as a Physical Fitness Trainer and worked as a personal trainer at The Sports Club Irvine for a few years after retirement from Rockwell.

Bob was physically active his entire life. He played baseball and football, loved to pump iron, was a black belt in Kenpo Karate , was a serious road bicyclist, velodrome bicyclist and never stopped training. He was known as ‘Superman,’ ‘No Mercy Bob,’ and ‘Dr. Pain’!

Bob had a very hard but interesting life. He was offered a baseball contract by a pro team in Roswell, New Mexico when he was about 18 but turned it down because he was making more money as a service manager at a Ford dealership. He taught Kenpo Karate for Ed Parker, worked out with Mike Stone, and once fought Chuck Norris. He also worked with Dieter K. Huzel, the #2 man under Von Braun who was a German scientist during World War II. He was proud to meet Dwight D. Eisenhower who was the Grand Marshall for the Rose Parade in Pasadena.

Funeral Mass will be at 10:00am on Saturday, July 21 at St. Timothy Catholic Church, Laguna Niguel, followed by burial at Ascension Cemetery, Lake Forest.

In lieu of flowers, donations may be made to the Veterans Administration, the National Rifle Association or the Boy & Girl Scouts of America.