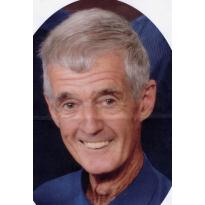 BELL, Robert Thomas, died on August 9, 2007 in Mission Viejo, CA after a four-year battle with melanoma. Born in Los Angeles, CA, Bob served his country in the Air Force during the Korean Conflict. He then graduated from UCLA with a Bachelor of Science degree in Chemistry. He and his wife of forty-one years made Mission Viejo their home since 1969 where they raised two sons. Bob worked for Beckman Coulter for over thirty years. He coached and then refereed soccer for AYSO in his spare time. A loving husband, dedicated father and compassionate animal advocate, Bob leaves behind a legacy of patience, love, true care and giving for his family. Bob is survived by his wife, Nancy; son, Matthew; son Michael and his wife, Gabriella; grandson Jeffrey and a niece and nephew. There will be a private funeral service and interment at Ft. Rosecrans National Cemetery in San Diego. In lieu of flowers, the family is requesting that donations be made to an animal rescue of your choice or to the American Cancer Society. O’Connor Mortuary-Directors.