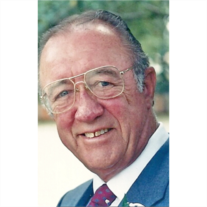 Known as “Robie” to family and friends, Robert Robeson was the middle child of three born to RH Robeson and Edna Stape, of Rochester, New York. He was born September 3, 1923 and died from natural causes November 19, 2017. He was 94 years old. Family surrounded him at the time of his passing, and his final moments were happy ones, as he had made his peace with the Lord.

Robie, an Eagle Scout, set his eyes on the Naval Academy, and announced to his parents he was going into the Navy. He graduated as a midshipman in 1945.

In December 1945, Robie married the love of his young life – Mary Stephens. He was 22 years of age; she was 23. Before long they had two sons – Jim and Scott.

Mary died in 1984, after 39 years of marriage. Three years later Robie met Louanna Reithner. She became his second wife, and a major part of the Robeson family of children, grandchildren, and great grandchildren. They were married 30 years.

After the Navy, Robie volunteered for a civilian-run organization designed to educate young people about the Navy. He also was hired by New York Life to train new agents and sell insurance. Robie had been a faithful member of the Rotary Club since 1973.

Robie Robeson is survived by his second wife, Louanna Robeson, of Laguna Niguel. Also surviving him are sons Jim (Rebecca) of San Diego and Scott (Karen) of Minneapolis and Louanna’s children Susan (Steve) of Dallas, Nancy (Ben) of Atlanta and Tom (Trisha) of Seattle. Four grandchildren and five great grandchildren also survive him.

Services and a Celebration of Life will be held November 25 at 12:00pm, at El Niguel Country Club in Laguna Niguel. In lieu of flowers, the family asks that donations be made, “In Memory of R.H. Robeson” to Laguna Niguel Rotary and Laguna Niguel Presbyterian Church.