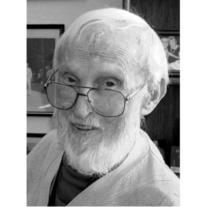 Bob Miller died peacefully in Laguna Niguel, with family and friends nearby, under the loving care of St. Michael Hospice and his dedicated assisted-living caregivers. Born in Oakland, California, to Robert and Etta Miller, Bob spent his childhood in Garden Grove and Santa Ana’mere villages back then’and his adolescence in San Francisco. A born adventurer, he sailed to China with the merchant marine after high school and bicycled through Europe when he was 19. Upon his return, Bob enrolled at Santa Barbara State College (now UCSB) where he met Norma Rae Vinson, who became his wife of 56 years. Shortly after graduation and marriage, America entered World War II. Bob enlisted in the Marines, earned his commission as a lieutenant and served in the Pacific. His first son, Robert III, was born while he was still in boot camp. His second, William, came along five years later. After the war, Bob and Norma returned to Garden Grove to raise their family while he worked as a parole administrator, rising to become a hearing commissioner on the California Board of Parole. Upon retirement, he and Norma traveled the world, exploring 90 countries.

Bob is survived by his two sons, two grandsons Christopher and Michael, and two longtime friends and “children by appointment” Ralph Jameson and Judy Jameson-Trulock. A memorial will be held in his honor; contact O’Connors Laguna Hills for details. In lieu of flowers, please make a donation to St. Michael Hospice. “Ol’ Traveler Bob” will be missed.