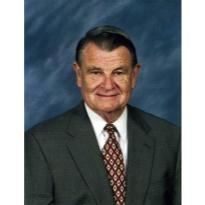 Robert Merritt Ward, a good and faithful servant, devoted to his entire family, respected business leader, dedicated philanthropist and a loyal friend to all who knew him, passed on to heavenly peace September 25, 2008. With the guidance and support of the incredible staff of UCI Medical Center doctors and their cutting edge treatments, he was able to fight a courageous battle against pancreatic cancer for 1-1/2 years. He was surrounded by loving family in his final hours.

Robert Bob was born to Frances and Frank Ward on March 21, 1929 in Los Angeles, CA and was raised and attended schools in Beverly Hills, CA. As a student at Beverly Hills High School, Bob was a four-year letterman in baseball, Student Body President and attended Boys’ State, an American Legion award. After graduating from high school in 1947 he attended the University of Oregon where he earned a B.S. degree in the School of Business. During his college career he was a member of the Alpha Tau Omega fraternity, held the position of house manager and served as an assistant cook where he became known for his famous ‘Ward’ burgers. In 1952 he was drafted into the United States Marine Corps and served for two years during the Korean War.

In 1953 he married former Beverly Hills High School schoolmate Virginia Jones. During their 15 years of marriage they resided in the California cities of Yermo, Downey, Santa Fe Springs and Naples. They had two children, Carolyn and Thomas. Bob worked for Sealright Corporation, a paper and plastics converting container business in Los Angeles, CA holding the position of Production Manager. Although he was a ‘corporate’ man, he enjoyed using his brick mason skills learned as a teenager whenever there was an opportunity.

In 1969 Bob married JoAnn Holifield Williams, daughter of Chet Holifield, who served as a United States Congressman for over 30 years. They resided in Newport Beach, CA for 23 years before JoAnn lost her fight with ovarian cancer in 1992. Bob and JoAnn were able to travel extensively, benefiting from JoAnn’s travel business in the cruise industry.

In 1973 Bob went to work for W.T. Billard, Inc., a material handling equipment company in Santa Fe Springs, CA. Bob served as Vice President and General Manager for over 30 years. As a committed leader in the business community he was elected Citizen-of-the-Year in 1992 by the city of Santa Fe Springs. During this time he also served eight years on the board of directors for the Santa Fe Springs Chamber of Commerce, and was actively involved in the SFS High School participating on the Foundation Board and in the Mentor Business Academy. Bob also served on the Board of Directors for the American Red Cross – Rio Hondo Chapter for six years, and was the Finance Chairman for the Boy Scouts of America.

In 1992 Bob was reintroduced to former Beverly Hills High School schoolmate Eleanor Knecht Reynolds Guinther through the match-making assistance of mutual friends Rita and Lynn Montjoy. Bob and El were married in 1995 and enjoyed a fulfilling life in many of their philanthropic organizations such as the Escondido Library Endowment Foundation, California Center for the Arts Escondido and San Diego Opera Association North Island Guild, and were active members of the Rancho Bernardo Community Presbyterian Church. After a valiant 4-1/2 year battle against ovarian cancer, Eleanor passed away on April 7, 2004. Eleanor’s three children were very grateful for the love and care Bob provided to their mother. After Eleanor’s passing, Bob found comfort in continuing his involvement in the above organizations including the Cancer Support Group sponsored by their church.

In 2007 Bob moved to Dana Point, CA to reside in the home adjacent to his daughter Carolyn, her husband Bryan Baum and their two daughters Charline and Jenna. Although he was afflicted with pancreatic cancer, he continued being a doting grandfather and dependable fan at his granddaughter’s soccer games. Bob also coordinated the social gatherings for his childhood friends and coworkers, and continued his charitable efforts. During his illness Bob was blessed with the birth of another granddaughter, Ava Mae, born to Shannon and Thomas Ward. Ava represented new life that helped contribute to Bob’s joy and happiness during this difficult struggle. Throughout his trials and tribulations, Bob remained an inspiration to all who knew him.

Bob is survived by his children and their families, brother Richard Ward and wife Dolores, brother-in-law Robert Strock, sister-in-law Judie Ward, and numerous loving nieces and nephews. He was preceded in death by brother James Ward and succeeded in death by sister Marilyn Strock.

Memorial services will be held at the Laguna Niguel Presbyterian Church, 30071 Ivy Glenn, Laguna Niguel, CA 92677 on Tuesday, October 21, 2008 at 10:00 a.m.. www.lnpc.org . Services are being coordinated by the O’Connor Mortuary www.oconnormortuary.com .

Bob Ward lived a life of love, loyalty and honor, values instilled in him by his parents and Beverly Vista Presbyterian church family. He demonstrated his faith through his works and always made those around him feel special. Bob will be missed dearly and his legacy will be carried on for many generations.