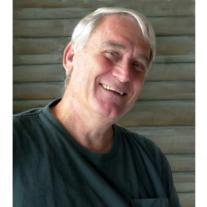 Robert Montgomery Skidmore, 65, of Mission Viejo, Calif., passed away on March 22, 2012, after a courageous battle with cancer. He was the devoted husband of Ranice Tune Skidmore, his best friend and the love of his life. They were married for 40 years.

Robert Montgomery Skidmore was born in Decatur, Ala., on January 23, 1947. Robert grew up in Priceville, Ala., and graduated from Priceville High School in 1965. He was a 1969 graduate of the University of Alabama-Tuscaloosa where he received a bachelor’s degree in chemistry. Robert received a master’s degree in international business management from the Thunderbird School of Global Management in Phoenix, Ariz., in 1977.

Robert was a Navy lieutenant and served on the U.S.S. Bausell during the Vietnam War. While in the Navy, he married Ranice Tune in 1971 in San Diego. Robert was a salesman. He was a sales executive for Shur-Lok Company, headquartered in Irvine, Calif., for more than 20 years, retiring in 2009. At Shur-Lok, he worked in sales in several positions, including regional sales manager and director of business development.

Robert was blessed with an outgoing personality, a sharp intellect, and a gift for storytelling. He was a steady and generous presence in the lives of his friends and family. He and his wife Ranice embraced the everyday as well as the extraordinary occasions in life. An inseparable couple, they were known to friends and family as “R & R.”

Memorial services were held on March 25 at the O’Connor Mortuary Chapel in Laguna Hills, Calif. Friends and relatives can leave remembrances at: www.oconnormortuary.com and view a video tribute to Robert at: http://lifetomotion.com/login/skidmore5988/movie/movie.html.

Those interested in making memorial contributions are requested to do so to Heifer International, an organization seeking to “end world hunger with charity gifts for sustainability and self-reliance.”
http://www.heifer.org/give/give?msource=KK1C120066