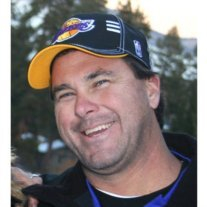 On January 28, 2013 Robert Lee Vetter III of Mission Viejo, CA passed away at the age of 44 and went to be with the Lord. Rob was born on August 10, 1968, the son of Robert Lee and Glenda Vetter of Phoenix, AZ. Rob was a passionate man. He loved his family so much and being an only child felt like his friends were his extended family. He loved life and lived it to the fullest bringing laughter and joy to everyone who knew him.

Rob grew up in Phoenix, AZ and began swimming at age 5. He swam competitively for 19 years. Rob attended Avondale Elementary where his mother worked as a teacher, and where he had his own private seat in the principal’s office. Little Robby loved to swim and would wear his Speedo under his clothes so that he could swim at a moment’s notice. Rob attended High School in Arizona and was a four-year varsity letterman in swimming. He went to Junior Nationals and was a finalist in the 100-yard breaststroke.

Rob attended Northern Arizona University in 1988 where he met his true love Kristy. In college Rob helped found the NAU men’s swim team, was captain 2 years, and the team won 3 consecutive Conference Championships while he was on the team. He graduated with a Bachelor of Science in Psychology. Rob and Kristy were married in 1993 and lived near USC where Kristy attended dental school until 1996. Rob excelled in sales moving up quickly in companies such as Gallo, Sky Courier and Purolator. His first son, Jason Robert, was born in 1998 followed by Cameron Scott in 2000, and Zachary Joseph in 2002. His sons were his world. He prided himself in raising young men of character. Rob infused himself in his boys’ life coaching MVYB basketball, SMVLL baseball, and AYSO soccer. He was on the AYSO board and was known around SMVLL as the “barbeque man”.

Rob was a strong man of faith, spending 19 days in Africa July of 2011 with Launch Out Ministries. His “cookie ministry” with the Marine Base in Camp Pendleton brought him much joy over the past year and a half. Rob decided to start doing triathlons after his African Mission Trip. He trained with friends and loved the experience of competing again. His ultimate goal was the Ironman. His son Cameron now says, “You’ll always be my Ironman.”

Rob was a thoughtful and compassionate man. If you ever needed anything Rob was there with his heart in his hand. His love was so greatoverflowing from his heart and encompassing all of us. He left a forever imprint on each of our hearts and lives. We will never be the same because we have known and loved Rob Vetter. Rob has left a wonderful legacy for his precious children and a great model of faith and love for his parents and his wife. Now he is forever with his Lord and Savior Jesus Christ.

The Memorial Service for Robert Vetter will be Monday, February 4, 2013 at 3 p.m. at Presbyterian Church of the Master, 26051 Marguerite Parkway, Mission Viejo, CA 92692 (Oso and Marguerite), reception following at church.

In lieu of flowers donations can be made to the Robert Lee Vetter Memorial Fund and mailed to 31371 Niguel Road, Suite F, Laguna Niguel, CA 92677. Donations benefit the education and athletics of Rob’s three children (Jason, Cameron, Zack).