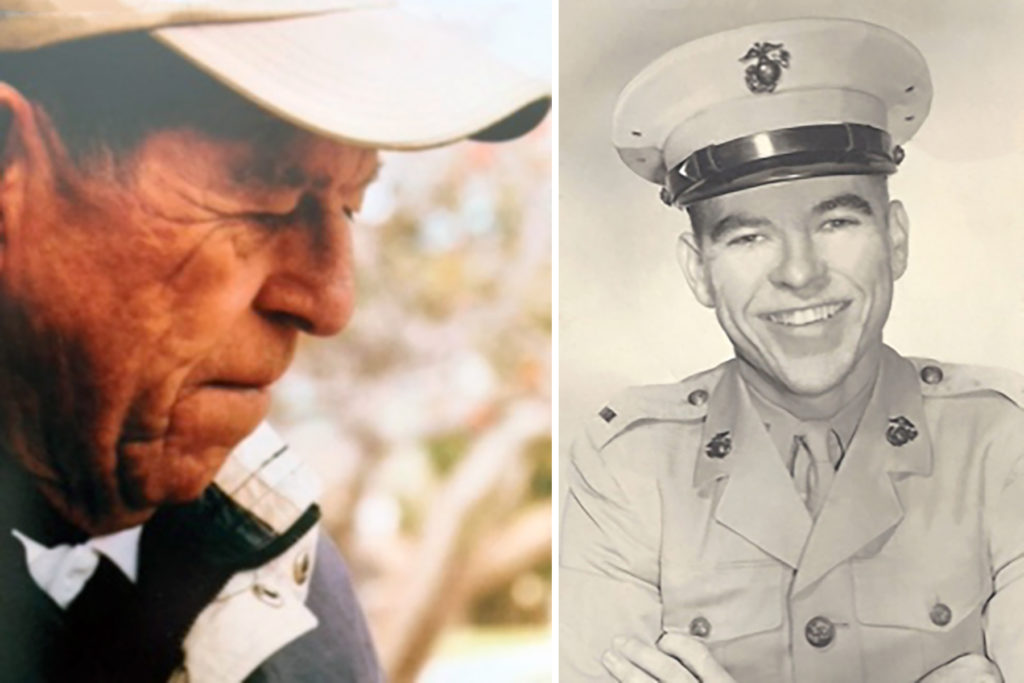 Major Robert J. Regan, USMC, Retired, passed away at home in Mission Viejo on January 10, 2022; at the age of 83. His wife Lynda and their 5 children were with him in his last few days. He was born (March 13, 1938) and raised in Brooklyn, NY to parents Virginia and Robert Joseph Regan Sr. As the only boy, he was the second of four children. He grew up surrounded by a large extended Irish, Catholic family. He enjoyed playing stick ball and played baseball throughout his school years. As an avid fan of the Brooklyn Dodgers, he spent many days hopping the fence to watch them play. Bob never forgave them for leaving Brooklyn after winning the 1955 World Series. Following his graduation from Brooklyn Prep, he went on to attend and graduate from St. Francis University in Loretto, Pennsylvania, where he met and married his wife, Lynda.

Major Regan’s 20-year career in the Marine Corps began straight out of college. Some highlights of service included: earning the Pistol Sharpshooters Badge; Armed Forces Expeditionary Medal with Star; serving on the USS Capricornus in the Mediterranean Sea and Caribbean; participating in Operation Bold Mariner, the largest amphibious operation carried out during the Vietnam Conflict; being awarded the Vietnam Service Medal, with three stars; being awarded the Navy Commendation Medal with Combat V device for Valor. Major Regan retired out of El Toro MCAS in September 1980. Bob continued careers as a Scheduling Engineer at CF Braun and as the Operations Manager for the Santa Margarita Water District, until retiring in 1998.

In retirement, Bob enjoyed spending time with his six grandchildren. Bob spent his days playing tennis and golf, meeting with the Birthday Boyz (his retired service buddies) for lunch, and spending time at home in his office (The Cave). There he worked on the computer while watching his favorite shows, movies and sports; The Andy Griffith Show, Gunsmoke, The Godfather and all John Wayne movies. His Irish lineage made him a true Notre Dame fan and his days stationed in the DC area made him a diehard Washington, Redskins fan. The family knew to schedule family brunches around televised Golf tournaments – especially any time Jordan Spieth was playing. He enjoyed Johnny Cash, Neil Diamond, and Abba – once asked what his favorite song was, we all expected him to name a Johnny Cash song. His answer, “Fernando”, the unexpected response sent us into surprised laughter. During the pandemic Bob filled his time playing Train Dominos with his family; always asking “Who’s the Boss?”. Anyone who knew Bob knows HE WAS the Boss. Bob was known for his quick wit, sense of humor and his storytelling talents. He was loved, and is already missed.

The family is grateful for the wonderful care Bob received from his team of doctors and nurses over the years.  Bob and Dr. Duc Pham had a wonderful respect and rapport, enjoying the jokes and banter during appointments. We cannot say enough about Dr. Michael Haga and his entire home health care team. They gained Bobs trust quickly and treated him with kindness, compassion and humor.

Major Regan was a proud Marine who always said, “serving in the Marine Corps was one of the best decisions I ever made,along with marrying Lynda”. Bob is survived by his wife of 60 years, Lynda, daughters Lynda Regan, Cheryl Regan, Laura (Tom) Hession, Christine (Justin) Jackson, and his son, Bobby (Jamie) Regan and his grandchildren; Michael, Brenna and Regan Hession, Justin and Kayla Jackson and Bradey Regan. Bob is also survived by his sisters Ginny (Paul) Myers, Claire (Neil) Cleary and Ruth Regan-Walicki and many loving cousins, nieces, nephews and friends.

In Memory of Major Robert Regan join our family at O’Connor’s Mortuary at 2pm February 8th followed by a gathering of family, friends and loved ones to raise a glass, share stories and meet old friends to say good-bye to a one of a kind at the Mission Viejo Country Club.

A Service with full military honors will be held the following day at Miramar National Cemetery at 2pm.  Check in is required, Cars will be lined up and escorted to the service promptly at 1:50 pm.