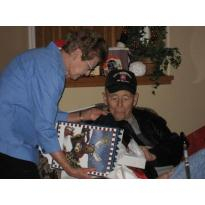 Robert J. Nieblas ‘Bob’, 85 passed away on October 20, 2009. Born July 6, 1924 to Joseph and Annie Nieblas. A fourth generation Californian, graduated from Santa Ana High School in 1943, enlisted in the US Army as a paratrooper with the 82nd Airborne. Jumped in Normandy D-Day, Holland and fought in the Battle of the Bulge during WWII. Awarded the Purple Heart and Bronze Star.

Survived by his wife of 64 years, Joyce; and his children, Carol, Marilyn, Robert, Gerard, and Therese; eight grandchildren, brothers, Peter and Paul; and numerous nieces and nephews. Predeceased by son, John; sister, Anna and brother, Tom.