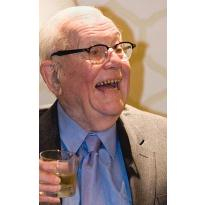 Bob McAndrews was born in the Spring of 1911 in the Mission District of San Francisco. He attended Catholic grammar and high schools in the City. In 1928 he joined the first class on the Moraga campus of Saint Mary’s College of California, to which he remained devoted throughout his life. He edited the College’s newspaper and was valedictorian of the Class of 1932.

Before and following graduation in the midst of the Great Depression, Bob worked for the college in various capacities, as teacher, debate coach, and advance press contact for the ‘Galloping Gaels’ football team. Bob became a staff announcer at NBC Radio in San Francisco following college, and eventually moved into sales and marketing with NBC. In 1940 he became promotion manager for NBC Western Division and moved to Los Angeles, where he met his wife-to-be Adelina Ciabarri. They married in 1943.

Bob joined the Army Air Corps in 1942, and served until war’s end as a Major in Washington D.C., handling public information and press matters. Post-war, Bob and Adelina moved back to Los Angeles, where Bob returned to NBC. He later worked in trade associations, and for years was general manager of radio station KBIG and its affiliates. He later worked for the California Savings and Loan League, retiring as Senior Vice President in 1983 at he age of 72. Throughout his career, he was active in public service, charitable and religious organizations. He was president of the Hollywood Advertising Club, the Hollywood Radio and Television Executives, the Southern California Association of Broadcasters and was a long-time member of the Pacific Pioneer Broadcasters.

Bob and Adelina moved to Dana Point in 1989, where they have resided since.

Bob is survived by his beloved and devoted wife of 66 years, Adelina; his son Peter and wife Alicia, Peter’s sons Rob and wife Gina and Tobin; his son Michael and wife Eileen, Michael’s children Jeff and partner Kevin Feeley, Tim and wife Suzanne and their sons Tim and Michael; Amy McAndrews Walters and husband Rob and their sons Charlie and Ben; and Caroline; and his daughter Julie McAndrews Mork and husband John, and their children Kyle and Alison.

The family requests that, in lieu of flowers, donations be made to the McAndrews Family Endowed Scholarship Fund, Saint Mary’s College, Post Office Box 4300, Moraga, California 94575.