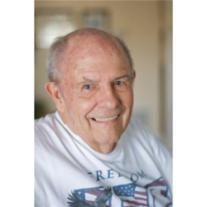 Robert John Dennis was born in Chicago, Illinois on August 11, 1927; was raised on the west side and attended 12 years of Catholic schools (Resurrection parish school 8 years, Quigley Preparatory Seminary 2 years, and St. Ignatius College Prep- 2 years) graduating in 1945. World War II was still in progress, so he joined the Navy on December 7, 1945.

The war ended while he was in boot camp at Great Lakes and he spent 2 years in the Navy, but never went to sea. His time was spent mostly in electronic training schools at Gulf Port, Mississippi, Great Lakes and the Naval Research Lab in Washington, DC. After discharge from the Navy, he attended Illinois Institute of Technology and majored in Electrical Engineering; building on the training he had received in the Navy, and graduated with a Bachelor of Science degree (BSEE).

Robert married Patricia Cella in 1950 and they had 5 children (Mark, George, Linda, Suzanne and Michele). They moved to California in 1962 when the company that he worked for (Cook Technological Center) asked him to setup a West Coast engineering and test facility. Highlights of his technical career include the following:

“¢ Research technician at Argonne National Laboratory in Lemont, Illinois where he worked with a team of scientists building one of the first electronic computers (Argonne Version of the Institute of Design Arithmetic Computer AVIDAC).

“¢ Project Engineer for Reliability and Test of the Minuteman II and III Guidance Systems for Systems Technology Labs (STL) and TRW Systems.

“¢ Senior Project Engineer in the Communications Directorate and Engineering Business Manager for the Central Dispatch Systems Division which designed and developed a process control computer for the Arabian American Oil Company (ARAMCO) in Dhahran, Saudi Arabia.

Robert retired from Hughes Aircraft in 1997 and had been enjoying his grandchildren and leisure activities that include woodworking, photography and the U.S. Coast guard Auxiliary.