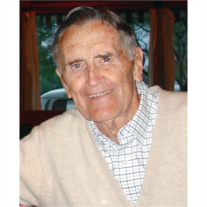 Bob was born in Chicago, IL. on August 24, 1921. He married the love of his life, Mary, on November 26, 1942. Bob served honorably with the U.S. Army in the Pacific Theater during World War II. Following the war, Bob spent nearly 50 years in optics manufacturing.

Bob and Mary moved to Mission Viejo, CA in 1976. After retiring in 1986, Bob renewed his passion for golf, reading, and tending to his roses. A faithful parishioner of St. Kilian’s Church, Bob also volunteered for many years at Mission Hospital and was a life-long member of the Knights of Columbus.

Bob was a wonderful and sweet man who touched the lives of all he met. His presence in the lives of his loved ones will be forever missed. Rest in peace Bob.

In lieu of flowers, donations may be made in Bob’s name to Mission Hospital, www.mission4health.com/For-Community/Supporters-Volunteers/Donations/Make-a-Donation.aspx