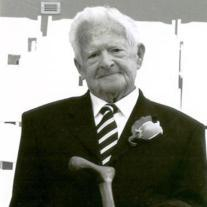 It is with great sadness the Ouellette family announces that on July 27th 2012, Robert “Roe” Ouellette of Amherstburg, Ontario, Canada and a resident of San Clemente, CA passed away at the age of 92. Roe, a member of the “Greatest Generation,” was a WW II Veteran, having served honorably in the Royal Canadian Army & Air Force. During the war, he was stationed in the U.K. where he met his future wife Lorna, who was serving in England’s Royal Air Force. At war’s end, he returned to Canada where he was later joined by his wife and first child Lorna Joan who both made the voyage from England on the Queen Mary. He was a man that dearly loved his family, most especially his grandchildren and great grandchildren. He was known to them as Dad, Grandpa, Great Grandpa and Poppy. Always having time for children and loving all variety of pets, he was at his best when surrounded by kids and dogs from the neighborhood and was always a source for treats and great stories.

In 1952 Roe moved his young, growing family from Windsor, Ontario, Canada to Southern California where he continued his successful professional life in the Automobile Industry, and in 1956, while living in Long Beach, Roe and Lorna completed their family with the birth of their third child Kim.

He was surrounded by his loving family at the time of his passing and is survived by Lorna his wife of nearly seventy years; his three children Lorna, Bob & Kim; and his six grandchildren, Wendy, Justin, Brady, Erin, Heather & Brittany. He is also survived by four great-grandchildren: Bryndan, Evan, Guillermo & Madison Lynn. He also leaves daughter-in-law Judi & son-in-law John Sorich.

We extend our sincere, enduring gratitude to the Doctors and Nursing Staff of Saddleback Memorial Medical Center in San Clemente for the incredible care and kindness extended to our loved one & family.

To honor Roe, in lieu of flowers, kindly contribute generously to the Robert Ouellette Memorial Fund that has been established in support of ongoing End-of-Life training for hospital staff. Tax deductible donations can be made by phone: 949/452-3724 or mail:

Last Rites were administered. No services are planned at this time.