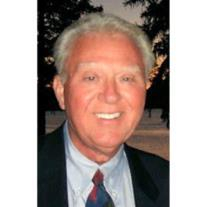 He was born to George and Edna Shearer, August 1st, 1937, and spent his early years in Pitcairn, PA. He graduated from high school in 1955 and received a Bachelor of Science from University of Indiana in Western Pennsylvania in 1964. He married Angela Kellner of Ellwood City, PA in 1961.

Robert began his higher academic studies in 1955, but entered the service in the U.S. Army in 1961 where he served in Korea for 2 years. Upon returning from Korea, he left the Army and completed his degree in 1964. His first professional role was an English teacher, but he soon began a lifelong career in Sales with Liberty Mutual Insurance then quickly transitioned to the diary packaging industry where he worked for 30 years. At 60 years old, he turned his attention toward Real Estate sales in South Orange County where he worked with his partner, Bojena Gorska, for another 15 years.

Outside of work, Robert had interests in reading, playing golf, vacationing on cruise ships, listening to jazz music, playing with a variety of tech toys and above all, playing with his grandchildren Ethan and Andrew. “Pap Pap”, as he was known, was very adept at helping them find popsicles, collect spare change and construct great Hot Wheels tracks. More recently, he had begun to show the boys his split-finger fastball and sinking curveball in close contested front yard baseball games with a whiffle ball.

In 2008, Robert received the gift of Life in the form of a kidney donation from his sister, Dorothy Blauvelt. This gave him a new lease on Life for the next 6 years to enjoy his family and be a wonderful Grandfather.

For all who knew him, he had a quick smile, a wonderful sense of humor, a great ear for listening, a sound word of advice on any topic and a willingness to give you the shirt off his back to help you get ahead.

Robert is survived by Angela, his wife for 53 wonderful years; daughter Jennifer Shearer of Kent, WA; son Steve Shearer, his wife Maggie and their 2 sons Ethan and Andrew of Newbury Park, CA; sister Dorothy Blauvelt and her husband Robert of North Bend, WA.

A brief ceremony will be held Miramar National Cemetery in San Diego on December 19th at 12:30 p.m.