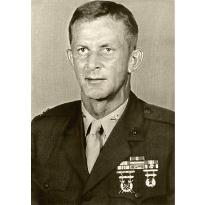 Robert Francis Bob Eggers, 77, a long-time resident of Dana Point, passed away 4/22/10. A leader of Marines for nearly three decades, Colonel Eggers held a variety of positions during an exemplary military career. Among his many duty assignments were two complete combat tours in Vietnam.

In dispersed locations both within the United States and with deployed forces overseas, he led fighting units of every size from Platoon to Battalion, and’ironically, since he was an infantry officer’a Marine Air Group.

Marine Corps achievements notwithstanding, for everyone who knew him there was no doubt that the true joy of Col. Eggers’ life was his family: Pat, his wife of 54 years; daughters Rhonda Butters and Laura Britt; sons-in-law Chris Butters and Tim Britt; and grandsons Austin and Ian Butters, and Robert and Christopher Britt, all of whom survive him.

After retiring from the Corps, Bob worked briefly in the real estate industry, then dedicated much of his time to participating in his grandsons’ activities successful, competing in duplicate bridge with his ever-present partner, Pat mostly successful; and perfecting his golf game marginally successful, at best. Bob was a much better football player back in his days at Humboldt State than he would ever be a golfer.

Col. Eggers rose from truly humble beginnings in eastern Washington. So it was not surprising that he entered retirement with an insatiable desire to help others. Participation in programs to assist members of the community was invariably part of his agenda.

It is difficult to estimate the number of people whose lives were changed for the better because they encountered Bob Eggers at just the right time. For those of us who knew him’in any of his diverse roles’Bob represented exactly the kind of enriching presence we all hope God will place in our lives someday.

A funeral Mass will be held at 9:30 a.m. on Friday, April 30 at St. Edward Catholic Church, Dana Point. Burial will be private at a later date.