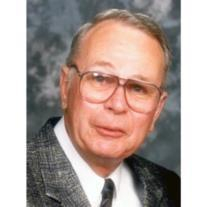 Robert (Bob) Helm was born on February 19th, 1927 in Evanston, Illinois and passed away on March 22nd, 2015 in Laguna Hills, California. He was a part of what is fondly referred to as “The Greatest Generation,” and I can’t help but smile as I say that because it is how we all truly feel about him. He grew up during the Great Depression, a grim time to say the least, and yet if you were to speak with him you would have thought it was the best time to grow up. He would always tell us stories of how delicious the tomatoes were that his mother was able to grow and how much he loved picking them. It didn’t matter to him that he ate tomatoes everyday or that their small garden was about the only thing keeping his family alive through those hard times, he was just happy everyone was healthy and that they had something to eat. His other great love was baseball, especially because it was his brother who taught him to play. He and Billy would often go after school to the park and play baseball for hours. Then WWII began and his brother Billy immediately enlisted to fight for his country. This greatly impacted Bob because to him, Billy was the most amazing person in the world and he feared that something might happen to Billy. Unfortunately, his fears came true and Billy was killed in action. This was devastating to not only him, but to his entire family. Although he knew the risks, he decided the best way to honor his brother’s death was to serve his country just as Billy had done and so he enlisted in the Army immediately upon graduating High School.

Fortunately for all of us he survived WWII and went on to college to be an aeronautical engineer and then joined the Air Force. It was during this time that he married my mom Hope Joanne Rask, whom he referred to as the most beautiful woman he had ever seen. They were married for 54 years and they had 2 children Laura Helm-Gasga and Jeff Helm. They eventually moved to California because he had gotten a job working in the aerospace industry. He worked for various companies but Northrup was his favorite and he remained with them for over 25 years. While at Northrup he enjoyed being a part of many top-secret projects including the designing of components for the Saturn IV rocket, which was the first rocket to bring man to the moon, and his personal favorite the B-2 Spirit, more commonly known as the “Stealth Bomber”. Though he lived an incredible life, or as he would put it, “A rather ordinary life”, what we remember most was the way he was with us, his family. He was a loving husband, son, brother, uncle, and father. He coached Jeff’s baseball team up until high school and would play for hours in the backyard with his grandsons. He would always give selflessly in order to provide a better life for his wife, children, and grandsons (Tejler, Josh, Zack, and Jacob) all of whom he would do anything for. He truly went above and beyond for all of us but what I am especially thankful for is the way he treated my sons Tejler and Josh as his own.

Though he would attend anything that his grandsons were involved in, what he loved most was watching them play baseball, a sport he, his brother, and his father all played. His abundance of love was not just restricted to his family; he loved all of the boys and people who were a part of his children and grandchildren’s lives. He would always ask us how they were all doing and we could tell it was because he truly cared.

Lastly and most importantly, he was a strong Christian man who instilled faith in his children and grandchildren. Although we miss him very much it does bring us all great comfort and joy to know that he is now home in heaven with the Lord and his loved ones. His last wishes were to let everyone know of Christ’s love for them and he hoped that his funeral would be a celebration not of him but of the joy that one can achieve by accepting Jesus Christ into their lives. He declared that he would be rejoicing in heaven if anyone accepted Christ, because then he would know that they would have everlasting life and that one day he would see them again. ‘I am the resurrection and the life. He who believes in Me, though he may die, he shall live. And whoever lives and believes in Me shall never die. Do you believe this?’ (John 17:25-26) God bless him and may he rest in peace.

Bob’s family welcomes flowers, or a donation may be made to the American Cancer Society in his name if you prefer. To make a donation, please go to www.cancer.org, hit the Donate button, and fill out the information with Bob’s name.