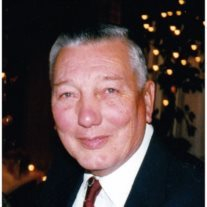 Bob, as he was known to family and friends, spent his first 33 years in Springfield, Ohio. He graduated Springfield High School in 1941 and was then accepted to Wittenberg College in 1942.

His college education was put on hold due to his enlistment in the Army in February 1943. Trained as a medical technician, assigned to Army Specialized Training Program at the University of Wisconsin at Madison, he was then sent to England (on the Queen Mary) in preparation for the invasion of Europe. He was assigned to the First Infantry Division (The Big Red One) as a surgical technician and landed on Omaha Beach the afternoon of D-Day. During the battle of Aachen, October 1944, he was wounded and taken prisoner by the Germans and imprisoned at Neubrandenburg in northern Germany. He was liberated by the Russians in April 1945 and returned to USA in June.

Bob returned to Wittenberg, graduating in 1950 with a BA in Business Administration. Not long after, he accepted a civil service position in contract procurement for the US Air Force at Wright-Patterson AFB. This was the beginning of a long and successful career, where his contributions to national defense were often recognized.

In 1952, Bob met a beautiful young girl named Nina Massie and married in 1955. They were blessed with the birth of their first child prior to Bob accepting a job transfer in 1957 that would bring them to Southern California. After settling into their new home in Los Alamitos, they were blessed with two additional children as they began their new life in sunny California.

Bob lived life to it’s fullest, raised his family, was a charter and active member of Bethlehem Lutheran Church. He was involved in his children’s activities such as Indian Guides, Boy Scouts, Little League and Softball, volunteering his time as manager and coach. Summers were reserved for the trek back to Springfield to spend time with the entire lot of grandparents, moms, dads, uncles, aunts and cousins left behind. This was a ritual that served to ensure the gift of priceless family memories. THANK YOU DAD and MOM !

Bob eventually retired in 1980 after 30 years in civil service with the US Air Force. He now possessed the gift of time. Still so much to do, catch up on, and just relax. He was a great conversationalist so more time to catch up with distant friends while making new friends. Camping club, fishing, photography, time with friends, time with grandkids, photography, genealogy, masonic activities, photography, planting vegetable gardens, supporting recycling programs at grandkids schools, photography. Did we mention photography…of course we did….as Bob was a bit of a camera buff. He would go out on a limb, stand at the edge of a cliff or in the middle of a hopefully deserted highway for that perfect shot and lived to get it developed. We, his children, will be forever grateful for the 6000+ slides this hobby produced, documenting the countless family trips, special occasions, milestone events and close family friends which will be forever preserved for our future generations.

Following the Masonic affiliations of his father, maternal grandfather, and great grandfather, Bob received his 32nd degree. He was a member of Norwalk Lodge 273, the Long Beach Scottish Rite, Royal Order of Talons and the Signal Hill Chapter 444 of the High-12.

Bob Van Tress…..husband, father, grandpa, friend, WWII Veteran, Ex-Prisoner of War and Purple Heart recipient……..thank you for your unconditional love, devotion, friendship and the greatest of sacrifices in service to your country. WE LOVE YOU.

A memorial celebration of life service will be held at 2:30pm on May 17th, 2014 at Bethlehem Lutheran Church, 3352 Katella Ave., Los Alamitos, CA 90720. Pastor Mark Will officiating. Reception after serving light fare.

A special THANK YOU to O’Connors Mortuary in Laguna Hills, California for their outstanding and compassionate service and care during this difficult time.

In lieu of flowers, family suggests donations be made to the American Cancer Society (www.cancer.org); American Diabetes Association (www.diabetes.org) and the Disabled American Veterans (www.dav.org).