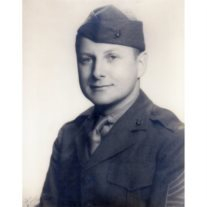 Robert, better known as “Bob”, was born in San Francisco to Robert Adams and Mary Esther (Cooper) Adams on October 1, 1920. Bob was subsequently raised and educated in the San Francisco area, graduating from Tamalpais High School in Mill Valley, California in 1938.

Following graduation, Bob worked for Bank of America, Wells Fargo Bank, and Bethlehem Steel before finding his “true calling” as a member of the United States Marine Corps. Bob was quite proud of being among the first to enlist in the Marine Corps only a day after President Roosevelt declared war on December 8, 1941. Consequently, Bob was with the first group of Marines to go overseas during WWII, who were also the first servicemen to take offensive action against the Japanese at Guadalcanal, Solomon Islands on August 7, 1942. A few years later, Bob was with the first Marines deployed overseas when President Truman declared war against North Korea in 1950. Bob dedicated his life to the Marine Corps for twenty-one years and was immensely proud of his service to his country. He retired in 1963, ultimately achieving a rank of Warrant Officer.

Bob went on to have another lengthy career, this time with California’s Employment Development Department. Bob was service-oriented in this career, as well, and at one point was responsible for seventeen different training or development programs involving veterans, older workers, teens, and the physically challenged. He spent twenty years helping the many people he came in contact with on a daily basis and then retired for good in 1982.

Bob’s life wasn’t just about work. He was a voracious reader and passed that love of books on to his three children. And because he loved to learn new things, Bob enrolled at Santa Ana College in his mid-forties and ultimately graduated with Academic Honors and a degree in Government Management in 1976. Bob also loved dogs, particularly cocker spaniels, and was an avid sports fan, too, especially when the Lakers or the Angels were playing on TV. But most of all, Bob loved his family.

Bob is survived by the love of his life, the wife he adored for sixty-eight years, Alferetta Jane (Robinson) Adams. He also leaves behind his children, Robert (Nancy), Susan, and Jeffrey (Pilar), who will miss him more than words can say.

A private graveside service for immediate family members will be held at El Toro Memorial Park on January 24, 2014 at 2:00 p.m.

The family requests in lieu of flowers memorial donations be sent to the Semper Fi Fund, the Cancer Research Institute, or the ASPCA.