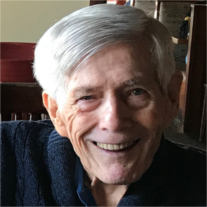 Robert (Bob) Cromwell McKinney. 92, passed away on Tuesday, August 1st at his home in Mission Viejo.

His is survived by his children, Robert and Lisa; his grandchildren, Madison and Bryce; and his companion of 12 years, Lois.

Bob was born in Las Paz, Bolivia on June 23, 1925 to missionary parents. He had two older sisters, Florence and Marjory. He grew up in La Mesa, California where he attended Grossmont Union High School where he played the Snare Drums, Xylophone and Marimba in the band. He was on the Tennis team as well. Upon graduation of high school, he attended San Diego State University for two years before being drafted into the Navy. He eventually graduated from UC Berkeley with an BS in Electrical Engineering in 1950 and later earned his Masters degree at USC.

Bob retired in 1987 from his job with the government at the Seal Beach Naval Weapons station and enjoyed 30 years of retirement. He spent the first part of retirement in San Diego to care for family members and then moved to Rancho Santa Margarita in 2002 to be closer to his family. He was part of the Rancho Santa Margarita Seniors club where he met his companion and best friend, Lois on a bus trip to Laughlin.

Bob spent his final years enjoying time with his family, watching his grandchildren grow up and spending time with Lois.

Bob was one of the most compassionate individuals that you would meet. He had a kind heart and a great smile.

A reception will follow at the residence of Lisa and Mark Purnell
16 Mira Segura, Rancho Santa Margarita, CA 92688