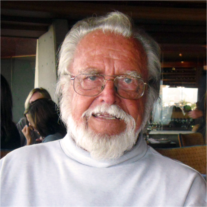 Robert “Bob” Ehly, or simply “Grandpa” to his many grandchildren, reunited with his beloved wife, Moreen, having passed away on September 4, 2016 after a brief hospitalization.

Bob was born in Dewar, Oklahoma, but grew up in Bartlesville, Oklahoma, home of the famous Phillips 66 championship basketball team, as he used to boast often. A star athlete at Bartlesville College High School, Bob also gave swimming lessons at the local YMCA, where he developed his championship diving skills that later earned him an athletic scholarship to Oklahoma University.

Upon graduation, Bob enlisted in the United States Marine Corps during World War II and served in the Pacific Theater in battles on Saipan, Tinian, and Okinawa. He was also an atomic veteran, having been among the first occupying troops on Nagasaki. After the war, Bob attended Oklahoma University on that diving scholarship, winning many competitions. However, his academic performance did not match his skills on the diving board. Even he would joke that in college he majored in “dance hall, pool hall, and alcohol.”

So Bob reenlisted in the Marine Corps, serving tours in Japan and training new recruits as a drill instructor stateside before his Honorable Discharge after 20 years of dedicated service. It was during embassy duty in Cairo, Egypt, that Bob met his wife, Moreen , a British woman born and raised in Egypt. After their courtship in the land of the pharoahs, Bob and Moreen married and eventually settled in Southern California to raise their 3 children, Vincent, Kurtis and Juliet.

Like many former military men at the time, Bob headed straight for the United States Postal Service. After 20 years of hard work and dedication that led to numerous promotions, Bob retired from the USPS as a Tour Superintendent at the General Mailing Facility in Santa Ana.

In his retirement years, Bob enjoyed weekends at the racetrack or short roadtrips with Moreen. But most of the time, Bob and Moreen helped to raise their 8 grandchildren. Bob drove the grandkids to and from school and helped them practice their math facts and reading. On weekends and all during the summer, Bob and Moreen would take the grandkids to the Sun and Sail club, where he taught them to swim, just like his old YMCA days back in Bartlesville.

Holiday dinners were special times at Grandma and Grandpa’s house, especially at Easter, when Grandpa baked his famous Bunny Cake. In his final years, after Moreen’s death in 2012, he was living life at home to his fullest with assistance from Pauline, his caregiver. Right up to the day before his hospitalization, he enjoyed shopping trips to the PX or the 99 cent store, visits to the Sun and Sail club to sit in the dry sauna, and relaxing moments watching college football or Wheel of Fortune and Jeopardy in his favorite lift chair.

He was truly one of a kind, with a wicked sense of humor that brought a smile to those around him. He will be sorely missed by his family and friends. Bob is survived by sons Vincent and Kurt; daughter Juliet; 8 grandchildren and 6 great-grandchildren: his niece Mary Jo and many great nieces and nephews.

Memorial services for Bob will be at 4:00 pm on September 10, 2016 at O’Connor Mortuary Chapel, 25301 Alicia Pkwy, Laguna Hills. In lieu of flowers, donations can be made to Wounded Warriors Family Support (woundedwarriorsfamilysupport.org).