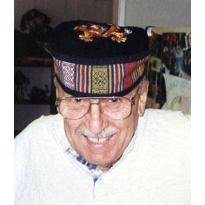 Robert Allen Bombarde, born in Portland, OR, on May 25, 1924 passed away on May 1, 2010, 24 days short of his 86th birthday in Mission Viejo, CA. He was the eldest of three children and only son of Alice and Domenico Bombarde.

Bob is survived by his daughter, Kerin Bombarde-Schwartz, and her husband, Jim, and his two grandsons, Jacob and Joshua of Lake Forest, CA; 5 nieces & nephews and 3 grand-nieces and -nephews. His youngest sister, Reda Gifford lives in London, England, with her husband Bruce. He was preceded in death by his younger sister Mary Jean Verschueren of Portland, OR.

He served in the Merchant Marines during WWII, which started his love of travel. Then Bob came back to Portland, worked his way through the University of Oregon and graduated in Political Science. He met and married, Laura, and they went on to Graduate School at AGSIM in Phoenix, AZ. The marriage later ended. He was always a free spirit and hoped to work overseas. They returned to the US and he got a job working as a Longshoreman. This was his calling and during his working years and traveling he called home San Francisco and later the Bay Area City of Alameda. In Alameda he met his long time friend Annie. He retired from the ILWU Longshoreman’s Union Local 34 at the age of 80. For the last 5 years he suffered from the complications of Alzheimer’s.

Robert was buried on May 10, 2010 at the Willamette National Cemetery in Portland, OR where his father, sister, and brother-in-law are buried. In lieu of flowers the family asks for donations to the Alzheimer’s Association. A tribute page has been set up at Alz.org/tributes under Robert Bombarde.