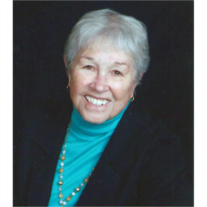 Rita Murdock Streed was born Rita Grace Murdock on October 5, 1925 in New Mexico to Roy and Gladys Murdock. She became a doting big sister to James and Charles, and was known as “Sis” to her family.

Rita met Henry Griffin Streed, Jr. at Woodbury College in Los Angeles, and they were married in 1943 while Henry was in the Marine Corps. They first lived in Chandler Heights, Arizona, where Gary and Laurie were born. A few years later, the young family moved to Norwalk, California, where James, Carolyn, and Robert completed the family. Rita remained a Norwalk resident for 68 years.

Rita enjoyed helping children in the Little Lake School District, volunteering with the Boy Scouts, Girl Scouts, and the Santa Fe High School Band, sewing for her family and community groups, and helping in countless other local activities.

She loved and was loved in return by many, including her church family, her neighbors, her own five children and their spouses, thirteen grandchildren, seven great-grandchildren, and her great-great- grandchild. Always a fan of music and musicals, Rita continued to enjoy music and other group activities in two senior living facilities until her passing.

A celebration of her inspirational life is planned on January 21, 2017 at 11:00 AM, at Trinity Lutheran Church, 11507 Studebaker Road in Norwalk, where Rita was extremely active as a member for 63 years.

In lieu of flowers, donations to the children of Trinity Christian School in her honor and memory would be appreciated. Children were always her priority, and as she was fond of saying, “Everyone is a teacher.”