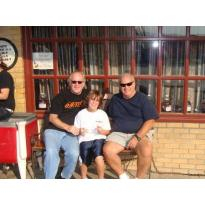 Richard Smith McVay, born in Kansas City, Missouri on July 30, 1952 died unexpectedly on January 11, 2011. He was living in Laguna Niguel, California where he had resided for 33 years. A graduate of Arizona State University with a degree in Business, he had worked for Pioneer, Maxell and most recently Sony from 1999 to 2009.

Richard loved sports as a teenager. He loved swimming and played both football and baseball. He spent many hours with his brother playing burnout. Richard also was an incredible mechanic in his younger years. He built many muscle cars with his brother Tom. Richard loved music. He loved many different genres and spent many hours listening, mixing and recording music. His favorite bands were the Allman Brothers and Led Zepplin.

Richard was a devoted son to his mother, a wonderful brother, a devoted friend, and a fun loving uncle. He loved spending time with his mother more than anyone. He recently moved his mother from Kansas City to Aliso Viejo so he could make sure she was taken care of. He was loved by all who knew him.
A memorial service will be held for Richard at Laguna Hills Chapel on Thursday, January 20, at 1:00pm. Richard is survived by his mother, Harriette Smith McVay of Aliso Viejo, his brother and sister-in-law, Tom and Tina McVay, one nephew, Matt Marks, four nieces, Taylor Bell, Katherine McVay, Michelle McVay and Nicole McVay, all of Asheville, North Carolina, an uncle, Elmo Burkhardt of Quincy, Illinois, an aunt, Lou McVay of Loveland, Colorado and a cousin, Jeff McVay of Greeley, Colorado.

In lieu of flowers, the family asks that donations be made in Richard’s name to a charity of your choice.