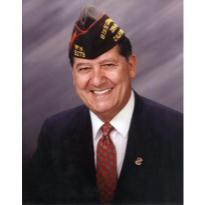 Richard Robert Pignone, 43 year resident of Lake Forest, passed away peacefully at home on July 28, 2009 at age 82. He was the seventh of nine children born to James and Susan Pignone on May 9, 1927 in Medford, Massachusetts.

At 5’7′ and weighing 117 pounds, he joined the Navy as a 17 year old to fight in WWII, serving on the USS Columbus in the Pacific theater. After the war, he returned stateside and studied art. He met and fell in love with the shapely-legged gal he met at the local roller rink in Medford. Sixth months later in 1948, he eloped with Mildred Davis, who would remain his wife for the next 61 years. Their three children were born in Massachusetts.

He fell into the garment industry and moved his family westward to California to make his fortune with the family garment business. Though he worked long, grueling hours at the garment shop, the proud father always managed to make the time to go to his children’s ball games. He had a lifelong love of baseball and was thrilled that his children and grandchildren had embraced the sport. He helped to start the Saddleback Little League in the late 1960s and coached youngsters for many years.

His career in the garment industry spanned 46 years until an injury forced him into retirement. Never one to sit idle, he threw himself into the Veterans of Foreign Wars, working actively to fundraise and grow the membership. He founded three posts in south Orange County and rose through the chairs to attain State Commander in 1994-95. He continued to be an active member of his local Posts to his final days. Many will remember him as the ‘Poppy’ man selling Poppies for the VFW in front of the Albertson’s on Muirlands.

During the course of his life, Richard Pignone shook the hands of four presidents John Kennedy, Jimmy Carter, Ronald Reagan, and Bill Clinton, one senator Robert Kennedy, and one First Lady Hilary Clinton. Along with other members of the VFW, he was able to attend an audience with Pope John Paul II during a tour of Italy.

Ready with a quip, a wink and a smile, he instilled in his children a wicked sense of humor, which made family gatherings lively and fun. He is survived by his beloved wife of 61 years, Mildred; three children: James and wife Leslie, Craig and wife Jennifer, Robyn and partner Rowena; 8 grandchildren: Bryan, Laura, Andrew, Amber, Anthony, Michael, Matthew, Robert; and sister Dolores. He also leaves behind an extended family who know him affectionately as ‘Poppops.’

Richard Pignone was a staunch patriot who loved family, friends, the VFW, his country, baseball, pasta and apple pie. He will be greatly missed by all. Donations in his memory may be made to the American Heart Association or the American Cancer Society.