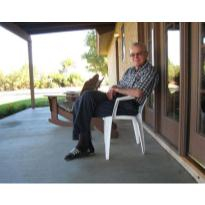 Richard Kain passed away on March 2, 2008 at 5:25 AM.  Born in Arkansas on June 27, 1925, he was a resident of California for more than sixty years.  Here he met and married his wife, Leota, and raised his family, which includes three daughters Barbara Parker, Vada Fry and Dara Gomez and two sons Ed Kain and Ross Kain.  He is survived by his wife and children, as well as by 17 grandchildren and 15 great grandchildren.  He is also survived by one brother, Rufus Kain, and by numerous nieces and nephews.

The two outstanding characteristics of Richard’s life are that he loved God with all of his heart and he loved his family with a boundless love that cannot be measured.  During his final days he was happy and peaceful, waking up in the mornings singing favorite old hymns and then spending many joyful hours with those he loved so much.  He was a prayer warrior who believed that God hears and answers us when we speak to him, and during those last few weeks his conversations with his Lord included lots of worship and praise as well as prayers for every member of his family.

One of Richard’s favorite pastimes was to play card games for hours on end–Pinochle was his favorite.  He also loved to fish, and also spent a lot of time walking and riding his bike because he always said if he didn’t use it, he’d lose it.

Richard will be greatly missed, but his family is comforted by the knowledge that though he is absent from his body, he is present with the Lord.