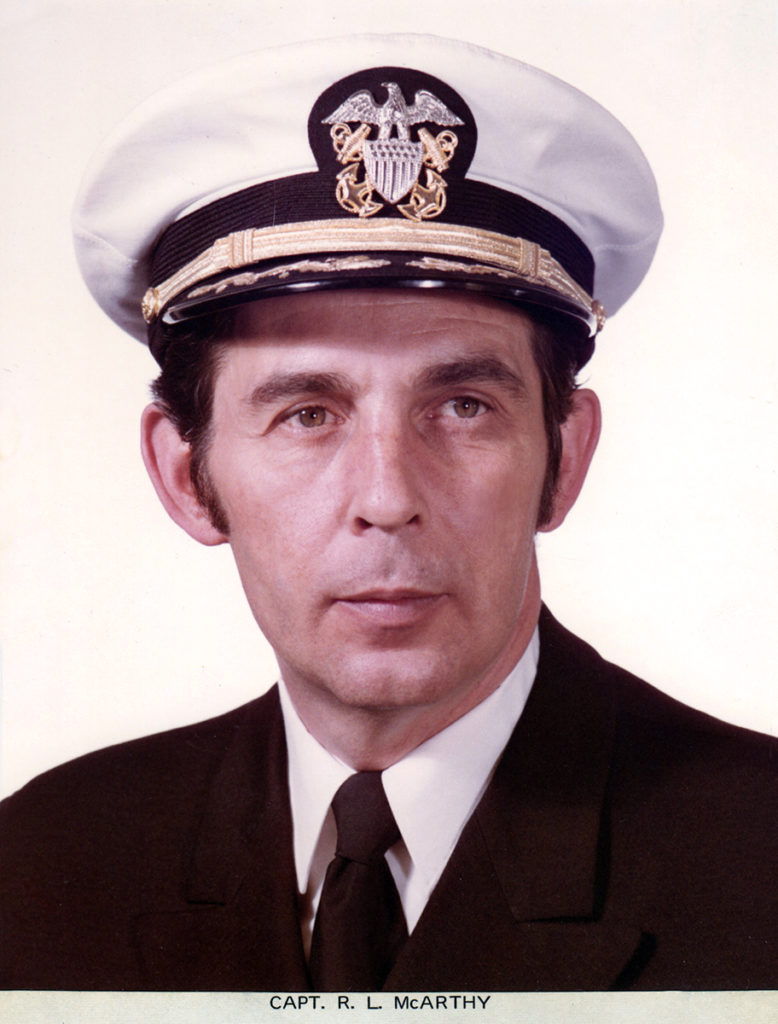 Richard Leland McArthy, devoted husband and father, retired US Navy Captain, died peacefully in his home in San Clemente, CA on June 28, 2018. He had celebrated his 90th birthday with his family on June 10, 2018. He was born in Wabash, Indiana June 10, 1928, the birth year of Mickey Mouse, Shirley Temple, and San Clemente. He was raised in Logansport, Indiana, graduating from high school in 1946. Richard was a life rank Boy Scout, helped collect aluminum for the war effort in WW2. He played drums in the marching band in high school.

He attended college at Purdue University under an ROTC scholarship earning degrees in Chemistry and Bachelor of Naval Science and Tactics. His first sea duty was aboard the USS Chevalier (DDR-805), which saw duty during the Korean conflict.  While stationed at Indian Head, Maryland he met and married his wife, Anna Mae in Washington, D.C. He received a master’s degree in Ordnance Engineering in 1957 at Lehigh University. Richard served on the USS Rochester and the USS Belle Grove, where he cruised to Cuba, during the Cuban Missile Crisis. He commanded the USS Windham County (LST-1170) to Viet Nam, moving his family to Japan. The family lived in Hawaii for 3 years as Richard served as Ordnance officer of a US Naval Ordnance base. Richard’s final navy post was to command the Naval Ammunition Depot in Crane, Indiana, returning to his home state. Lt. Governor Orr appointed his as Chairman of the Indiana Department of Commerce Science Advisory Committee in 1974. Richard retired from the US Navy in 1975 and entered civilian life moving to San Clemente, California in 1977. He served as site manager at the TRW Capistrano Test Site in San Clemente for 10 years. Richard fully embraced his new home of San Clemente. Richard served as President of the San Clemente chapter of Rotary, 1978-1980 and was also a member of the San Clemente Dons. Richard was inducted into the Purdue ROTC Hall of Fame in 2013.

Richard was keenly interested in all kinds of music; and played in the Old Town Jazz Band and Revelation Jazz band. He was an avid computer user, with interests in science, archeology, history, Ireland and music. Richard had a fascination for genealogy and devoted many hours to tracing his family history and assisting others with theirs. He was proud to trace relatives to the revolutionary war.

His family treasures his endless curiosity and wonder, teaching us to admire the world around us. He loved plants, animals, birds, the universe, geography and travel. He never stopped reading and learning. He was a proud and supportive father.

A small memorial is being planned for close friends and family. In lieu of flowers please send donations to Rotary International. https://www.rotary.org/en/donate.