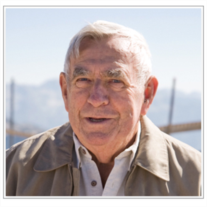 Richard (Dick) Lyston Harding, 87, died peacefully on Saturday, October 21, 2017 at Mission Hospital in Mission Viejo, CA, with his family at his side.

He leaves his wife of 57 years, Cecilia Ortega Harding; his daughter, Celeste and her husband, Lonnie Jackson; his son, Mike Harding and his wife, Suzanne; his grandchildren Michaela, Garrett, Caden and Emme; and many neices and nephews.

The son of Ralph and Nettie Harding, Dick was born and raised in Fremont, Indiana. After high school, he enlisted in the Air Force where he received his engineering education and training and served until 1954.

Following the Air Force, Dick worked and traveled for Hughes Aircraft. It was during one of his assignments at Holloman Air Force Base in Alamogordo, NM, where he met Cecilia on a blind date. They married in 1960 and shortly thereafter moved to Woodland Hills, CA, where Dick would continue his aerospace engineering career with Hughes, Teledyne and Litton until his retirement at age 65.

With a passion to fly since middle school, Dick earned his pilot’s license in the early 1970’s and enjoyed flying his own small planes, particularly quick flights for breakfast on the weekends and even a family trip to Indiana. Because the airport was located across from work, he would regularly fly during his lunch break. Whenever he wasn’t home, you would probably find him hanging out at the airport with friends or working on planes.

A smart and handy man who could fix most anything, Dick took pride that he rarely had to call anyone for repairs so was always working on cars, homes, airplanes, boats, electronics – whatever needed to be done as he had all the tools he needed. He also played a wicked card game. Dick’s sport of choice was bowling and he was fortunate to bowl two “300” games and earned the Senior California State Championship Title at the
age of 78.

Dick and Cecilia retired to Oakhurst, CA, in 1994 and relished in a slower pace with mountains, Bass Lake and new friends. He became an avid golfer who had the rare experience of a hole in one, enjoyed the lake and his pontoon boat and continued to bowl regularly. At their new home, Dick built a large workshop to house his tractor, mower and abundance of tools. This became his new haven where he spent a lot of time tinkering with any project he could find. He also kept busy with property maintenance (mowing, burning brush, chopping wood, refinishing the deck, etc) – still doing most of it himself. During this time, he was blessed to have 4 grandchildren and became fondly known by all as “Papa”.

Dick and Cecilia moved to Southern California in 2015 and he was thankful to be closer to family and medical services. Outings for coffee and donuts or pancakes was a favorite activity as was meeting up for a margarita in the late afternoons. A quiet and gentle man of few words, Dick truly loved and appreciated his family, friends and all the goodness life brought him – and we all knew that!

A Funeral Mass will be held November 10th at 10:30am at St. Kilian’s Church in Mission Viejo, CA. Reception to immediately follow at Hacienda On The Lake in Mission Viejo.

Gathering will be held November 20th at 10am at Beams Funeral Home in Fremont, IN, with a procession to Jamestown Cemetery for 11am burial services. Reception to immediately follow at Mulligan’s Restaurant on St. James Golf Course in Angola, IN.