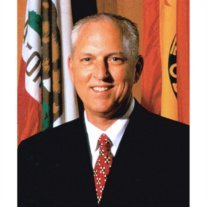 Richard Kent Goacher, 65, of Orange County, California, passed away at his home in Santiago Canyon surrounded by his family on June 22, 2013. He had been diagnosed with brain cancer within the past year. But his great contributions to Orange County residents endures.

Rick is survived by his wife Pam of 44 years; daughter Kim and her husband Jeff Werkmeister; son Geoff and his wife Caryn Goacher; and six grandchildren. Rick was a loving husband, father, grandfather and friend to all. He was close to his entire family, all of whom lived within minutes of each other and happily enjoyed spending time together and interacting on a daily basis. Of all his many activities, spending time with his grandchildren was by far his favorite.

Rick was born in Anderson, Indiana and spent his boyhood years enjoying visits with his brother and sister to the Goacher family’s productive and colorful 40-acre farm. His early experiences at the farm inspired in him a strong work-ethic, as well as an understanding of the blessings that come from working together with family.

As a boy, Rick also admired his uncle “Potsy” Goacher (a nickname that came from his dyslexia which made the letters of “stop” signs appear backwards) who went on to be a famous 1950-s era race car driver in a fearless and joyful pursuit of someday winning the Indianapolis 500. Experiences like this taught Rick how much people love watching someone joyfully and courageously pursue their passions with great showmanship and faith. He also realized this was a way to meet as many people as possible, knowing that each one would become a new and dear friend for life.

Even as a teenager, when his family moved to Texas and then eventually California, Rick was a highly enterprising person and had an uncanny gift for diplomacy in tense situations and for bringing people of diverse interests together in a spirit of cooperation. He was always passionate about politics and civics, as he saw this as a forum where he could joyfully and courageously use his gifts to improve the world even if only at a local level. Not surprisingly, in college he was elected to lead the student government at California State University, Dominguez Hills, playing a critical role during the school’s formative years as its campus was being planned and constructed.

After obtaining a Masters of Public Administration degree, Rick’s incredible talents were quickly realized at the City of Riverside where he began his work as a city planner. His superiors were in awe of his seemingly “Midas Touch,” as the projects assigned to him became unusually successful. But the reason for this success was no mystery to anyone who ever had the pleasure of working with him. He was devoted to fully completing any task that was ever assigned to him no matter how small it was – with a level of care, enthusiasm and excellence that would never fail. He soon became the Senior Planner for the City of Riverside.

After that, Rick moved his young family to the newly incorporated City of Irvine, where he quickly rose through the ranks from Senior Planner to Division Chief. He spent four years helping to plan and create Irvine’s famed “planned communities,” which since became a model for new master-planned communities throughout the USA. The Irvine communities of Woodbridge, Turtle Rock, Northwood, and the campus of University of California at Irvine all bear Rick’s fingerprints and hard work (as do the Irvine communities of Shady Canyon and Quail Hill, which he later worked on as a consultant).

Following his work as a city planner, he ventured out as a consultant and became fascinated by business and entrepreneurial activities. This started when the savvy owner and financial genius of a large civil engineering firm saw Rick’s great potential as a businessman and mentored Rick in how to run a successful business. The lessons were all so simple. But they were also so important. And with these new skills, the financial reins of this large company were turned over to Rick. To give an idea of Rick’s level of industriousness, he was only 28 years old at that point.

In the years that followed, Rick served as planning director for many of the industry’s top land use consulting and engineering firms, managing and overseeing literally hundreds of land-planning and development projects throughout California, the United States and the world.

As a volunteer, he was also the first Planning Commissioner appointed in the City of Lake Forest at its incorporation, and as chairman of the commission Rick played a pivotal role in the development of the City’s vision, plans, and governing documents. Later, he also served as the Chairman of the Orange County Planning Commission, where his gentle, witty, honest and reassuring leadership helped bring a sense of calm and harmony to even the most tense and heated public hearings imaginable.

But Rick’s dream was to be able to fulfill what he experienced and enjoyed so much as a kid: a family business. So after years of loyal clients urging him to start his own firm, Rick started the land-use planning firm “RGP” in 1991 with his family and has grown it into California’s premiere land planning firm over the course of 22 wonderful years.

The job titles that produced the greatest joy in Rick’s life were “Husband”, “Father” and “Grandad”. He was a loving and devoted husband to the love of his life, Pam, as well as a wonderful father and grandfather. His six grandchildren adored him and looked forward to every chance they had to be together.

Most importantly, Rick was a man of steadfast Christian faith who believed that developing a close walk with Jesus Christ was the key to a successful and fulfilling life. It was out of this faith that he became known to everyone he knew as a highly generous and compassionate man. He believed his mission field was anyone who happened to be near him.

In the weeks before his cancer diagnosis, Rick was in Russia with his wife Pam on a mission to reach others with the good news of salvation through Christ. The trip was an immense success, including opportunities to be interviewed on Russian radio, a chance to present a lecture at Moscow University, lots of time spent ministering to kids in Russian orphanages, as well as getting to make deep friendships with lots of people on the other side of the world.

A service to celebrate Rick’s life will be held on Thursday, June 27th at 11 am at Saddleback Church in Lake Forest (the service will occur in Tent 3). A reception will immediately follow at the church.