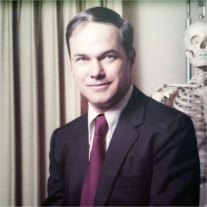 Richard J. “Dick” Drexelius, MD passed from this life to the next after sudden respiratory failure on May 9th, 2017, at his home in Laguna Beach.

Dick was born on July 19th, 1931 in Cincinnati, Ohio, the only child of Leonard and Helen (Bittner) Drexelius. He was a very intellectual young man and placed first in a city-wide exam which allowed him to attend “Latin School,” combining 7th and 8th grades. He initially considered a vocation in the priesthood, but later found his calling in the field of medicine. He was the first member of his family to receive higher education, and attended the University of Cincinnati for both his undergraduate and medical degrees. Dick worked rigorous summer jobs including wheat harvesting in Nebraska and halibut fishing and canning in Alaska to pay for his education. He received his MD degree in 1956 and was a licensed physician in the State of California for over 50 years.

After graduating from medical school, Dick began his residency training in Long Beach, CA at Seaside Hospital, now Long Beach Memorial. It was there that he met a beautiful obstetrics nurse, the love of his life, Virginia Lorraine “Lori” Watrin from Calgary, Canada. Shortly before their marriage in 1959, Dick was inducted into the U.S. Army as a military physician during the Cold War, and was subsequently stationed in Augsburg, Germany. Some of their fondest memories were of their two year “extended honeymoon,” touring all over Europe in their red Austin Healy Sprite. Both were always impeccably dressed, he in a suit and tie and she in gloves and skirt.

The young couple returned stateside in 1961, and Dick then completed his residency training in Radiology at MD Anderson Cancer Center in Houston, TX, where his two eldest children were born. After finishing his residency, the family returned to California and settled in Laguna Beach, where they remained residents for over 50 years. Dr. Drex was a very well respected Radiologist in the Orange County medical community, as one of the original physicians of Leisure World and later with his private practice based in Mission Viejo, and X-ray technician school. Radiology was his golf game, and he worked until just a few years before his death. He had an encyclopedic memory for medicine, and could identify and discuss rare findings even if he hadn’t seen them for decades. He especially loved to mentor younger generations of doctors and medical professionals.

Dr. Drex was a devoted husband, father and grandfather who was very proud of his family. He was a self-taught, intellectually curious person, lover of music, philosophy, military and world history, among many other endeavors. He was also a wicked craps player and enjoyed many trips to Las Vegas with his family. He loved to teach others about any of these subjects, especially philosophy, poker and craps.

A memorial mass will be held at St. Catherine Parish in Laguna, with Celebration of Life services to follow, in July. Please email andrea@frenchbasketeer.com if you would like to attend.