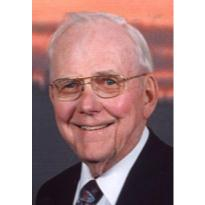 Richard Wickstrand was born April 13, 1925, and passed away on November 11th 2010 after a courageous battle with cancer. His home for the major part of his life was Rockford, Illinois. He and his wife Audrey of 62 years moved to Oceanside Ca in 2009 to be closer to their family.

Family came first with Richard and he truly enjoyed the last year and a half being able to have spontaneous and frequent plans with them. He and his wife spent many winters in Palm Desert California, enjoying tennis with many friends at Deep Canyon Tennis Club. When they moved to their current address he renewed his passion for billiards with new friends at the Clubhouse.

Richard spent three years in the Navy. Upon returning he was employed by Factory Supplies Company of Rockford Illinois. After several promotions he eventually purchased the company, which he ran successfully for 45 years. His son Gregg joined him in 1976 after he graduated college. Richard retired in 1990 and his son Gregg successfully took over the business until 2000 when he and his family moved to Del Mar California after selling the business.

He was an extremely generous person and made many anonymous donations to several charitable organizations. His philosophy was ‘if you have been successful you should share with those in greater need.’ He continued to support many organizations throughout his life. Richard was predeceased by his son Dan Wickstrand; his parents Judy and Herb Wickstrand and his sister Lenora Carncross. He is survived by his wife Audrey of Oceanside CA; his son Gregg Wickstrand and wife Terri of Carlsbad, CA; grandson Matthew Wickstrand and wife Tenaya of San Marcos, CA; granddaughter Erin Bloom and husband Zvi, and great grandson Yosef Chaim, of Madison, WI; sister Marge Sudduth; nephew Herb Sudduth of Tucson, AZ; nephew Steve Carncross and wife Vicky of Naperville, IL; nephew Chuck Carncross and wife Maureen, of Germantown, TN.

Memorials may be sent to the Dan Wickstrand Foundation at Milestone Inc. 4060 McFarland Rd. Rockford, IL, 61111. This foundation was established several years ago at Milestone, an organization for developmentally disabled. This foundation serves approx. 350 clients, some of whom have no relatives to help them. It gives them birthday and Christmas gifts, as well as sponsors many enjoyable outings and special events.

A Memorial Service for family and friends will be held Wednesday November, 17, 2010 at 11:30 A.M. at the Shadowridge Country Club, 1980 Gateway Drive, Vista, California, 92081 with lunch following.