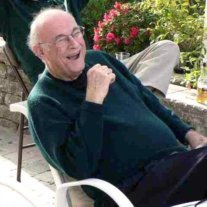 Richard Wallace “Dick” Shannon of Laguna Woods passed away peacefully on April 3, 2013. Dick was born on May 13, 1928 in Los Angeles, CA to Wallace and Vinnie Patin Shannon. Dick is survived by his wife of 63 years, Joan McGreevy Shannon, his sons Kevin and Dennis, and his daughters Maureen and Kelley. He is also survived by 10 grandchildren and 6 great-grandchildren, as well as his 3 brothers, Brian, Jeff and Patrick, their spouses and families.

Dick grew up in Long Beach, CA and was a graduate of Long Beach Poly (class of ’46) and of Long Beach City College (class of ’48). It was during high school that he met Joan, the love of his life and they married in January 1950. Dick was a U.S Marine Reservist during this time and was called up for active duty in July 1950, due to the Korean War.

After his discharge from the Marine’s, Dick enjoyed a long, successful career in sales, starting at the ground level and working his way up to National Sales Manager for companies such as Graybar Electric; Waste King International; KitchenAid; Thermador and Jenn-Aire. It was during this time that Dick and Joan were able to travel Hawaii; Italy; Spain; Portugal; Japan; Switzerland; Germany and the Bahamas. In 1977, Dick left the corporate world and became his own boss, buying a Conroy’s Flower Shop (Santa Ana) and later a Gloria Jean’s Coffee Beans (San Diego). After moving to Laguna Woods in 1999, Dick tried his hand as a Security Guard at Leisure World and finally retired in 2009! After retirement, Dick and Joan were blessed to be able to travel to South Africa, Zimbabwe and England, a trip that Dick remembered as the very best one of all!

A man of great faith, Dick was a very active member of St. Nicholas Catholic Church in El Toro, serving as a Eucharistic Minister; Lecturer and Facilitator at the RCIA classes for new and returning Catholics. His love of God and his willingness to share that love, has transformed and touched many, many people.

It is with great joy that we will remember Dick’s sense of humor, his love of family, his source of wisdom and his willingness to always listen and counsel. He will be sorely missed.

A Mass of Christian Burial will be offered in celebration of Dick’s wonderful life on Monday, April 15th at St. Nicholas Catholic Church in El Toro at 11:00 a.m. The family requests that in lieu of flowers, contributions be made in Dick’s name to Micah’s Way (www.micahsway.org).