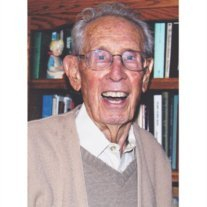 Richard Charles Robbins passed away peacefully January 31, 2013, in the loving care of his family at the age of 97.

Born in West Lafayette, Indiana, on August 14, 1915, Richard graduated from Purdue University with a Bachelor’s Degree and Master’s Degree, after serving as Cadet Colonel of the Army ROTC. He later earned his Doctorate from UCLA. He served with distinction in the United States Army during WWII as a Major in the Field Artillery, 86th Infantry in Europe and Asia.

He resumed his career after the war in California, teaching, consulting and working in counseling and guidance administration at schools and universities in Los Angeles, Stockton, Riverside and San Francisco. He also served on various state and national educational committees.

He and his beloved wife, Irene Westfall Robbins, were married in 1936 and shared 71 happy loving years together, retiring to Santa Rosa in 1977, and later moving to Irvine in 2006. In Irvine he remained active at Irvine Presbyterian Church, continued his counseling career, served on various boards and committees, gave lectures and volunteered.

Richard leaves behind a proud heritage, living a life of action, hard work, spiritual belief, service and love of family. Wherever we are, whatever we do, we will always have his example to follow.

Memorial services will be held at Irvine Presbyterian Church at 4445 Alton Parkway, Irvine 92604, on Saturday, February 16th at 2 p.m.

Donations to the Braille Institute Library Services are suggested in lieu of flowers.