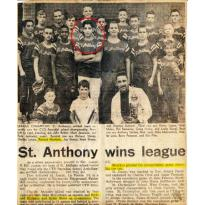 Richard Anthony Montano was born in Los Angeles, California on February 7, 1947 to David and Alice. He was the 3rd of seven children. He attended St. Anthony’s grade school, and graduated from Gardena High School, where he played football and baseball.

On August 1, 1967, he enlisted in the United States Army. After boot camp, he was deployed to Vietnam and was part of the 25th Infantry ‘Tropic Lightning’ Division. While there, he earned the rank of Staff Sergeant, and bravely led and protected many other soldiers. He was shot three times, and in return, received three Purple Heart medals. He also received the very honorable Bronze Star medal on July 22, 1969 for his acts of heroism. Finally, on July 31, 1969, after two brave years of service, he was honorably discharged, and was sent home.

In February 1990, he met his soul mate, Sharon, and was married on September 8th of the same year. They spent 19 wonderful years together. When they weren’t frequenting the local Indian Gaming establishments, they were jet setting to Las Vegas, New York, Hawaii, Alaska, and Acapulco. But, their most joyous times were spent with their loving families.

His most recent pleasure and joy came from spending time with his beautiful grandson, Michael Jett. Though they only had one short year together, Michael was the sparkle in his ‘Gampa’s’ eye, and he will always be ‘Gampa’s Boy.’

Richard will always be remembered for his gentle touch, his generous heart, his Homer Simpson-like stories, and his uncanny ability to put a smile on every and anyone’s face. He will always hold a place in the hearts of all who knew him.