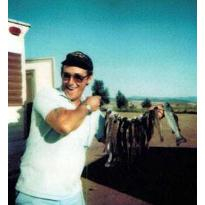 Lee, Richard Allan ‘Dick’, 79 of Irvine, passed away peacefully at home on January 10th, 2009. He was born August 5th, 1929 in Renton, Washington. One of eleven children, he lived on the family farm in Mt. Hood, Hood River and Portland, Oregon. In the forties he joined the U.S. Army paratroopers and eventually returned to Oregon. He moved to Southern California in 1968 and married Patricia in 1969. He was a beloved husband, father, grandfather, great-grandfather, brother, uncle and friend. A retired Teamster driver of 37 years, he obtained an award for One Million Miles without a safety incident. Dick cherished his family and is survived by his loving wife of 40 years, Patricia; his children, Michael, Patrick, Gary, Barry, Gregory, Corinne and Robin; brothers, Kenneth Lee of O’Fallon, MO., Eugene Lee of Portland, OR.; sisters, Jean Hoeninger of St. Louis, MO., and Shirley Greenman of Santa Ana, CA. as well as 21 grand-children and 18 great grand-children. We are very proud of Dad Poppa, and he will be greatly missed. Funeral arrangements will be held January 22nd at 1:00 p.m. at O’Connor Mortuary, 25301 Alicia Parkway, Laguna Hills, CA. Condolences.