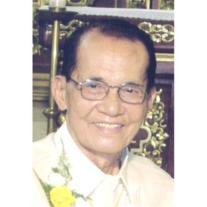 Ricardo Manalo Jimenez was born October 6, 1927 in Pampanga, Philippines. One of five children to Cornelio and Julia Jimenez, he was known to family and close friends as ‘Carding’ and fondly called ‘Ding’ by Gliceria, his wife of 52 years. Ricardo passed away on Tuesday, December 19, 2006 at Mission Medical Center in Mission Viejo, California.

Ricardo had a great sense of humor. He loved to joke around and enjoyed the company of friends and family. At times he was thought of as an impatient man, but this was merely his
zest for life, to be always on the move. A mini ‘McGyver,’ he can practically put things together from nothing. When asked how he can do it, he could be heard talking to his children and grandchildren saying, ‘you just need to be resourceful, tactica militar lang yan.’

A loving husband, he cared for his wife for many years when she was taken ill. A good family provider, Ricardo worked hard and with his wife raised their four children to provide them the education they had dreamt for them.

Ricardo is survived by his loving wife, Gliceria; four loving children; two beloved brothers, Marcial and Pablito, and six grandchildren. He will always be remembered as a devoted husband, loving father, a generous man who loved to joke around and a man with zest for life.

The family would like to thank you for all your sympathy, support and prayers during this most difficult time and their time of sorrow.