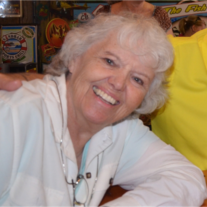 Rena was born in Belen, NM to Horace and Helen Hart. She grew up on a farm in Noxon, MT with her younger sister Daralie. Her cousins, Marlene, Jolene and Mary lived just down the path and all the girls grew up and played in pastures, rivers and mountains together in the beautiful Clark Fork River Valley. The family’s farm had to be sold and Rena finished her senior year of high school at Covina High School in Covina California. Rena then attended Mt. San Antonio College where studied to be a secretary. While living in Covina, California she attended the Assembly of God church where she married her husband David James (Jim) Chaney in 1956. Rena began her working career with Southern California Edison. She worked there for the next few years until she became pregnant with her first child. Jim and Rena’s first child Carren was born in 1962 and Julie came along in 1966. She and Jim raised their family in Covina, spending summers in Hope, Idaho on Lake Pend O’reille. Having grown up so close to nature, Rena wanted her children to experience the outdoors. There were many family trips to the mountains, the desert and the beach, with much of the family time spent camping and hiking all over the west. Rena did go back to work when her kids were of school age and she worked part time and full time as an administrative assistant in Azusa and Temple City school districts. She finished her working career as the secretary to the President of Citrus College. Rena’s retirement came a few years after the passing of her husband Jim in 1998. In her retirement, she moved to Laguna Nigel CA to live near Carren, and Carren’s partner, Diane. Rena bought a condo so she could travel extensively to visit Julie and son-in-law Jeff in Florida and spend time with her two grandchildren Hope and James. She also experienced many adventures traveling to Israel, Turkey, South Africa, South America and Italy. Rena and her family also spent time in Baja California and Mexico, visiting her retired parents Horace and Helen who spent the winters traveling throughout Baja and Mexico. Rena enjoyed walking in nature, snorkeling, reading mysteries and solving all kinds of brain teaser puzzles. Rena’s main focus and pleasure in life was devoting time and attention to her family. She never wanted to miss an event no matter how far away. Rena lived her life led by her faith in God and his promise of eternal life.

After the service, food and fellowship will be held at 2:30 PM at The Olive Garden
24256 El Toro Rd. Laguna Woods, CA.