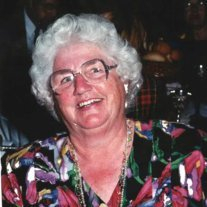 Reidun Marie Clausen of Laguna Woods, California passed away peacefully in her sleep at her home on Sunday, September 29, 2013. Marie is survived by her two children, Ann and John, her three grandchildren, Danny, Kayla and Erik and two great-grandchildren Ashlynn and Bentley. She is also survived by her lone living sibling Ms. Herlaug Torkildsen of Raften, Norway, the last of her eight brothers and sisters, and countless nieces, nephews and other close relatives throughout Norway.

Marie was born on December 20, 1927 inside the Artic Circle in Lofoten, Norway to Julius and Lovise Olsen. She lived in Norway through the end of World War II, five of which under Nazi occupation. At that time she immigrated to Sweden for schooling and work and eventually fell in love with a handsome Dane, Evald Marius Clausen and followed him to America to start their new life together. After a brief time in New York, they settled into their American life in Hawthorne, California where they raised their family and solidified their dreams. After losing the love of her life to a long battle with cancer in November 1983, Marie started a new chapter in her life in Temecula, California where she thrived for twelve years amongst family and friends. The second to last move for Marie came in 2001 when she moved to Laguna Woods and the final occurred when she moved into the loving arms of her Lord and Savior.

Marie, Mumsy, Farmor, Ra-Ra had many names, but clearly Ra-Ra, the version of Farmor (father’s mother in Norwegian) that her granddaughter Kayla coined at a very early age, was the one she seemed most proud of. Marie loved people, loved conversation and always had a smile to share with anyone that would give her the opportunity. She could never get enough hugs and it was quite common to witness random workers at various shops or restaurants greet her with open arms. She could talk to you about history, about her children or grandchildren, her favorite pets, politics, God’s creation, her grandchildren, her favorite anecdote, her friendships in far places, the trips she had taken, her grandchildren, cooking, knitting, her favorite TV show and if you gave her enough time, all of the above..

Marie was the key link between the U.S. and all our Norwegian relatives, always staying current over the phone and acting as a resting place for travel weary relatives visiting America. She very much enjoyed cooking, baking and providing for those around her. She was a wife and mother first, but very much enjoyed the various roles she played as a PTA volunteer, crossing guard, summer camp cook, restaurant hostess and toll road cashier. In her quiet time she loved to knit sweaters, read a good novel, do crossword puzzles, paint or listen to country music.

A celebration of Marie’s life will be held on Saturday, October 26, 2013 at 10:00 AM at the Chapel on the Mariners Church campus, 5001 Newport Coast Drive, Irvine, CA 92603. In lieu of flowers, donations may be made in her memory to Freedom Alliance Scholarship Fund at www.freedomalliance.org.