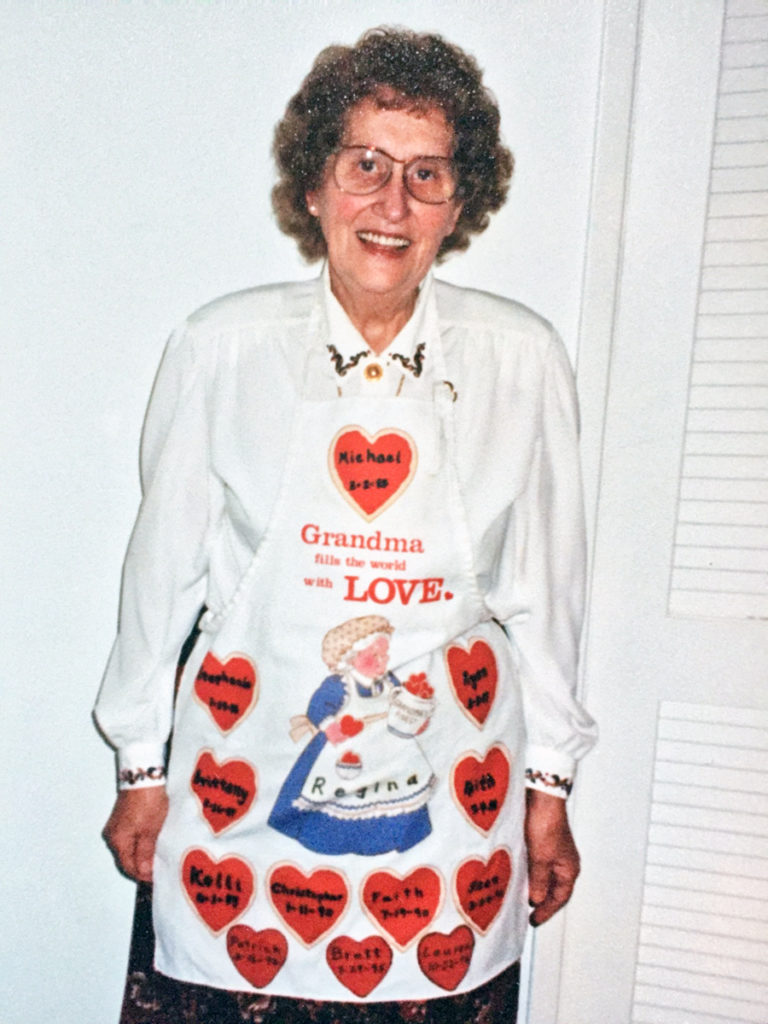 Regina Leona Hagan, 93, passed away peacefully on March 5th, 2019. Known as “Reggie” or “Mom” or “Grandma” to friends and family, Regina was a devoted and loving friend, daughter, sister, wife, mother and grandmother. She was preceded in death by her husband of 62 years, Noel Collins Hagan, Jr., her parents Anton Horst and Julia Suchy Horst, and her five brothers and four sisters.

Regina was born in the farm country of Webster, South Dakota on November 18, 1925. She was the ninth child in a family of ten children. Regina departed South Dakota when she was 18 for North Carolina to attend Meredith College for one semester, then traveled to Seattle, WA to live with her sister Laura where she worked part time while attending Seattle College. Regina made one of the best decisions in her life when she moved to the Los Angeles area in 1949 and was employed by United Airlines. That is where Regina joined a young people’s club at her church and met her future husband, Noel “Bud” Hagan, Jr.

After a whirlwind romance, they became engaged on Easter Sunday and were married on Regina’s birthday November 18, 1950. Five children were born to this blessed union. One memory Regina spoke lovingly about was her 50thanniversary. She and Bud cruised with their children and grandchildren to Mexico. Regina loved being surrounded by her family for this special event.

Regina referred to herself as a “cradle to grave” Catholic. She and Noel were active parishioners from the 1960’s to the early 2000’s at St. Louise de Marillac Church in Covina. Regina was employed with the Covina-Valley School District from 1972 to 1990 when she retired. She was twice a breast cancer survivor, loved to work in her garden, traveled the world with her beloved husband, rooted for her Los Angeles Dodgers, created beautiful Barbie doll cakes that were the envy of the neighborhood, danced the hula to “The Hukilau” for her children, was a scorekeeper for her children’s baseball and softball teams, and up to her last days she would correct incorrect grammar which was enjoyed by her family. Her children learned not to call their Mom on the phone during her favorite game show “Wheel of Fortune”. She was an avid Bridge player all her life and won many local Bridge tournaments. But most of all, Regina loved spending time with her family and created beautiful memories of Christmas, Easter, birthday, and baptism gatherings. Regina’s adoration of her family was evident and she was a strong influence in their lives. Regina Hagan, “Reggie”, “Mom”, “Grandma” will be forever missed by family and friends.

The celebration of Regina’s life will take place at Our Mother of Confidence Catholic Church in San Diego, CA, May 11that 11 a.m.

In lieu of flowers, the family requests that people make donations to:

The City of Hope https://donate.cityofhope.org/Main/CardsForHope.aspx

I had two Mothers – two Mothers I claim
Two different people, yet with the same name.
Two separate women, diverse by design,
But I loved them both because they were mine.
The first was the Mother who carried me here,
Gave birth and nurtured and launched my career.
She was the one whose features I bear,
Complete with the facial expressions I wear.
She gave me her love, which follows me yet,
Along with the examples in life that she set.
As I got older, she somehow younger grew,
And we’d laugh as just Mothers and daughters should do.
But then came the time that her mind clouded so,
And I sensed that the Mother I knew would soon go.
So quickly she changed and turned into the other,
A stranger who dressed in the clothes of my Mother.
Oh, she looked the same, at least at arm’s length,
But now she was the child and I was her strength.
We’d come full circle, we women three,
My Mother the first, the second and me.
And if my own children should come to a day,
When a new Mother comes and the old goes away,
I’d ask of them nothing that I didn’t do.
Love both of your Mothers as both have loved you.