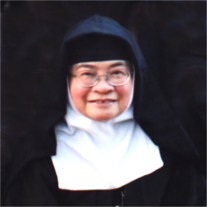 Rebecca R. Inigo (Sister Maria Angela), 66 of Mission Viejo, California, passed away on Friday, May 20, 2016 at Capistrano Beach Care Center in Capistrano Beach, California.
She was born on October 13, 1949 in Quezon City, Philippines to the late Roberto R. Inigo and survived by mother, Placida M. Rigor. She had a deceased brother, Robert Jr. and 5 surviving brothers: Romeo, Roland, Bobby, Ramon and Ralph; and a sister, Nancy (Javier).
Rebecca attended Grammar School, High School and completed her College education with a degree of Bachelor of Science in Commerce at Far Eastern University, Manila, Philippines on May 8, 1969; became a CPA on October 13, 1970.
Family, friends and prayer life became her passion and delight. She became deeply involved in religious life when she was still in high school. After finishing college she came to the US and got a job in Accounting. After working for several years she realized that something was missing in her life. She became involved in missionary life and found this fitting for her. Working with missionaries eventually led to her desire to join a cloistered monastery. She began her search with IRL attending discernment retreats; searching her chosen vocation. She joined Corpus Christi Monastery (Menlo Park, CA) where she discovered her love for cloistered and monastic life. Her desire to dedicate her life to prayer and penance was so strong. She eventually chose The Visitation Monastery of Snellville, GA where she devoted her service to her Redeemer for 18 years.
Sister Maria Angela Inigo, V.H.M – Monastery Religious History were as follows:
Novitiate July 16, 1996
1st Vows. July 26, 1998
Final Vows. July 15, 2001
Left Monastery August 1, 2014

The family wishes to thank all the Sisters of the Visitation Maryfield in Snellville, Georgia ‘our sister will be coming home to her final resting place at your Calvary Shrine’;
all those who cared for Rebecca R. Inigo (Sister Maria Angela) during the last months of her life and all family and friends who have express their love and support in their time of bereavement.

Though I only knew her a very short time; I remember Sister Maria Angela had a beautiful smile.
Sister Rosemary Kotyuk

I remember Sister Maria Angela in a very funny response she made the day before Lent started. They were removing all the regular condiments for our very bare Ash Wednesday meals. She was very fond of honey with breakfast. When I saw her , she was walking out of the refectory kind of moaning to herself, “Oohh, no honey, no honey.”
Sister Bernadette Marie Hossfeld,

Sister Maria Angela was a very spiritual Sister. Anytime she was free of work, you could find her in the Chapel or the Prayer Room.
Sister Mary Peter Accardi

Dear Family,
Remembering Angela is such a sweet experience, and I am grateful for this opportunity. I am much older than Angela- I am 82 years old, but there were sweet and happy moments we shared talking about the small Prayer Room Mother had built in the new building. It is like being alone in your own private place with Jesus. We both loved that little room better than anywhere else in the Monastery. Whenever I go there now, I always find her presence there. Your dear Sister will always be remembered with love and happy thoughts. God bless you. May your hearts be happy for having had her, even for a little while. Love and blessings of Jesus and Mary.
Sister Mary Regina Beckley

The soul of our Savior knew Sister Maria Angela As a contemplative, she desired to know only one thing, her Savior. Her great desire for silence and recollection, great love for the Blessed Sacrament, great devotion to the Stations of the Cross and Rosary, and prolonged Thanksgiving; all these inclined her to long for the life of Enclosure. Our dear Sister had a way of passing unnoticed, not wanting to stand out. If God was to exalt her in Heaven, she wanted here on earth to remain hidden, even after death. Well, St. Francis de Sales reminds us, “Look often to eternity and you will not be troubled at the accidents of this mortal life.”
Sister Teresa Maria Kulangara

Sister Maria Angela was a very lovable person. I was always moved when I saw her totally absorbed in prayer, in God. That was why I took that picture of her. It was beautiful to see. It became clear to me one day that she had been given a special gift, to love being with Jesus in the Blessed Sacrament. She wondered why people did not spend more time with Him. She did not realize that few had what she had been given. I personally am convinced that God permitted Sister to go through all these trials these last two years, because He alone knew that she would soon be in eternity. It was her purification.. Sister Josefa Maria Chicoine