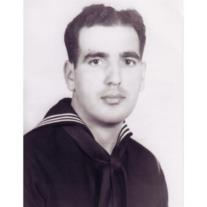 Born in Detroit, MI on February 3, 1921, Raymond Velardo (Ray) was the youngest of four children and the only son of Joseph and Maryanne Velardo. On March 4, 2015, at the age of 94, Ray peacefully passed away at home in Laguna Niguel. His oldest daughter was at his side.

Ray was raised in Detroit and met his future wife, Margaret Pauline Munton (Marge) while attending Denby High School. They were married for 72 years prior to Marge’s death in 2014.

After WWII began, Ray enlisted in the U.S. Navy. He served as a draftsman in the engineering department at the U.S. Naval Amphibious Base on Coronado Island. When the war ended, Raymond received an honorable discharge and had achieved the rank of Fireman First Class.

In 1947 Ray, Marge and their children left Detroit and moved to Southern California where Ray pursued a long and successful career in civil engineering. He worked for engineering companies that produced the plot plans for residential and commercial developments in south Los Angeles County and throughout Orange County.

Ray was an unabashed patriot and liked nothing more than seeing the U.S. flag flutter in the breeze. His home always donned a flag and Ray supported many veterans groups. He was also the champion of the under dog or the down trodden and was generous with others who were in need. Ray was a humble man who did not hesitate to step in and defend someone who needed help, even if it meant putting himself at risk. Ray had a talent that he shared with everyone. He loved to joke and make people laugh. He had a special ability to make people smile and just brighten their day.

Ray had 3 daughters: Crystal Kochendorfer of Dana Point, CA, Cheryle Velardo of Palmyra, PA, and Deborah Scott of Little Elm, TX. He is survived by daughters Crystal and Deborah, his six grandchildren and his thirteen great grandchildren. He will be missed by all.

Services will be at Miramar National Cemetery at a later date.