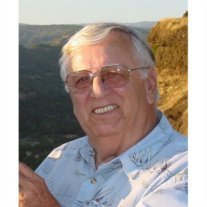 Raymond Anthony Maiorano of Laguna Woods, passed away peacefully on March 4, 2013 surrounded by his family.

He was born in Chicago Heights, Illinois in 1931 to Michele and Gilda Maiorano. He grew up in a traditional Italian family, with his younger siblings Joseph, Lavina, and Rose. He attended church at St. Rocco’s, and graduated from Bloom Township High School.

After graduation he joined the US Airforce and served bravely in Korea and Japan with the 315th Air Combat Cargo division. After returning home he attended Purdue University, eventually moved to California and graduated from Woodbury University with a Bachelors degree in business.

Ray remained active through out his life is many patriotic and community service organizations including the Knights of Columbus and the American Legion. In more recent years he remained active in the various community groups in Laguna Woods.

Most of his working career, was spent in the shipping and distribution industry. Early in his work life, Ray worked as an editor for the LA Times and Norwalk Call. Through all his career he always remained a dreamer, and optimist and generous even when he did not have the means. All who met him will fondly remember Ray As a kind sole, reserved outwardly , but deeply caring

He is survived by his wife Noreen, and children Dante, Joe, Tony, Denise, Heide, Donna, Barry, Brian, Patrick, Sean, and 15 grandchildren. He is preceded by his sister Rose Wetzel, and sons Liam Meuse Maiorano, and Kevin Meuse Maiorano.

Services will be held March 9, at 9 AM, at St. Nicholas Parish, Laguna Woods.

9 responses to Raymond A. Maiorano