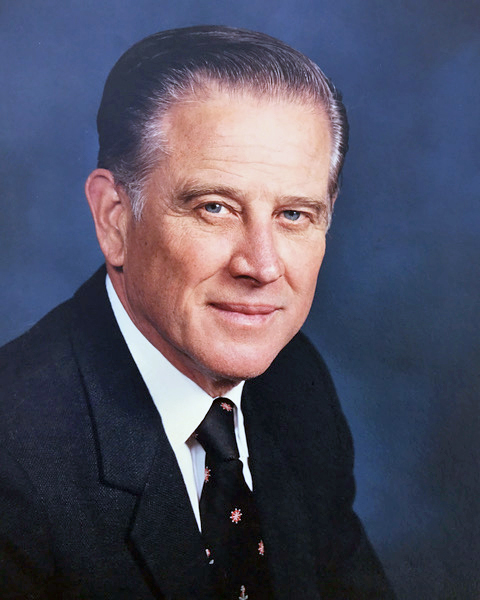 Ray Albert Burke
December 5th 1921 – August 11th 2018
Ray A. Burke passed on the morning of August 11th, 2018. It was a peaceful event with several family members present at Mission Hospital, in Mission Viejo, California. He was 96. He is survived by his wife of 72 years, Jimmye Myrtle Burke, their three sons, daughter-in-laws, six grandchildren and a brother.
Ray was born in Elgin, Texas, the sixth of seven to Wade Hampton Burke and Lula Belle Burke on December 5th, 1921. He had four brothers and two sisters.
After graduating from Elgin High School he went on to study Geology at The University of Texas in Austin. It was during this time that he met the love of his life, Jimmye Myrtle Winkler from Giddings, Texas, at a dance at Lake Bastrop State Park.
His studies were interrupted by World War II when he joined the Navy. He became a Naval Aviator and flew in over thirty missions in the Pacific Theatre. It was during this period when he was stateside for additional training, that he married Jimmye, in Wildwood, New Jersey and then returned to combat. After the close of the war he reenrolled in school and finished his degree at UT, in Geological Sciences.
Just last year, he was honored by the L.T. Barrows Founders Circle at the UT Jackson School of Geosciences. Ray and his brother Thomas created an ongoing scholarship and work program for students in the Jackson School of Geosciences.
Ray Burke was an oil finder extraordinaire. The arc of his career with UNOCAL took him from the Gulf Region, to West Texas and on to Los Angeles. From there, he helped open oil and gas regions domestically and globally, creating an intercontinental industry for UNOCAL. He was also a visionary in Geothermal energy, making UNOCAL the worldwide leader in that industry.
Having compiled an impressive list of achievements, he retired in 1989 as Executive Vice President in charge of worldwide energy resources, a member of the Board of Directors and a member of the Executive Committee of UNOCAL.
They lived in Arcadia, California while working at UNOCAL and raising their family. In the early 70s, Ray built their new home in Dana Point, California where he and Jimmye moved after retirement. In the late 80s, Ray built a vacation home in Mammoth Lakes, California, where they enjoyed having family and friends visit.
Ray was decorated by the US Navy and was awarded the Distinguished Flying Cross and the Air Medal with five clusters. He also earned a Carnegie Hero’s Medal for bravery, and the oil industry honored him with the prestigious Mr. Spindletop Award. He was the recipient of Thailand’s highest honor, the Royal Decoration “Commander of the Most Noble Order of the Crown of Thailand” and received several other industry awards.
Ray was a man of Faith and  leadership. He will forever be remembered as an adventurer with a great curiosity for knowledge. He possessed the drive to be his best at all that he did. He was modest in speech but a brilliant conversationalist and story teller who could talk about anything but himself. Quick to laugh and tell a joke, Ray also enjoyed music and dancing. He was an extremely generous man to both his family and community. He was a passionate golfer, enjoyed hunting, fishing and taking vacations with his family. His warmth and humanity, wit and wisdom will be missed greatly by all who knew and loved him. For all his accomplishments and from those whom he helped, ” thank you!
There will be a Memorial Service held at Gloria Dei Lutheran Church in Dana Point on August 25th, at 11:00am with a Reception to follow at the church at 12:00pm.
In lieu of flowers please consider a donation in honor of Ray A. Burke to the Alzhimers Foundation of America, 322 8th Ave. 7th Floor NY, NY 10001 866-232-8484  alzfdn.org