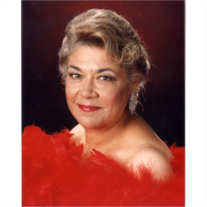 The Lord has called my love to be with him and comfort her till he summons me to be with her. It has been 62 years’ short earth years, but it will be for eternally when he calls. We spent time together as no one can imagine. We met when she was 8 and she made a commitment to marry me, that was her goal.

Raquel had gone to all girl catholic school (Sacred Heart of Mary) in Sag Harbor, NY from there she continued her education Misericordia College in Pennsylvania then transferred to Ohio State where she decided to get married on June 5th 1954. We shared five children, Mike, Larry, Chris, Toni, Raquel; 17 grandchildren and 8 great grandchildren.

In 1970 she decided thru a friend to join her in Tupperware and where she began a successful career becoming a top manager, then top distributor in the twice in the nation. She finally retired 35 years later and life was beautiful; we got to travel the world. I thank her for that, she was my soul and life!