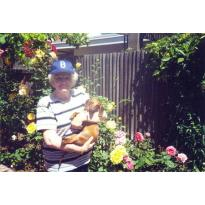 Memorial services for Ramona Smith will be held Friday, September 16 at 10 AM at Saint Elizabeth Ann Seton Catholic Church in Irvine.

The twenty plus year resident of Palos Verdes died on August 30 in Irvine of natural causes.

Ramona Coughlin Smith was born in Brooklyn, New York, and thus, became a lifelong Dodger fan. Ramona has one sister who arrived in the family when Ramona was 17 years old: Leona Griffin lives in Vermont.

Ramona expected to become a nurse, bust when she met and married Ludwig Smith she gave up her plans to enter nurses? training. Instead, she went to work in the Kayser Shop in New York so Ludwig could attend college and then law school.

When Ludwig was invited to become a corporate officer of Litton Industries in Beverly Hills the family moved to California and settled in Palos Verdes Estates. Ramona became active in the Spastic Children’s League and four different PTAs and her husband became Senior Vice-President of Litton Industries. As part of his work, he traveled worldwide. Ramona also enjoyed travel, particularly trips to Europe, Asia, and the Greek Islands.

When the Smiths were divorced Ramona pursued a longstanding interest and studied at the Los Angeles School of Interior Design. She later worked selling real estate in Palos Verdes Estates. When she retired and moved to Costa del Sol in Mission Viejo she became a Hospice volunteer at Saddleback Hospital.

Ramona moved to Regents Point in July 1999. She jointed Saint Elizabeth Ann Seton Church in Irvine and became a member of the Legion of Mary Auxilliary. At Regents Point she volunteered in the Country Store, in Sunridge, and for earthquake drills.

Ramona’s interests include reading, dancing, and a lifelong love of the theatre. Previously she enjoyed playing tennis and a little bit of golf and still watches the major tennis and golf tournaments on television. She is an avid sports fan and attended many games of the Dodgers, Angels, and Lakers.

During the time she lived in Mission Viejo, Ramona cared for her first child, daughter Mona Louise, who died of a brain tumor in 1986. Three of the Smith children are Californians and one lives in Oregon. Oldest son, Steven lives in Chico, Paul and Cary live in Orange County., and son Larry lives in Oregon. Ramona has seven grandchildren and one great grandson.

In lieu of flowers please consider a donation to Saddleback Hospice.