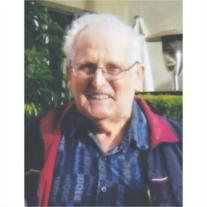 Ralph L. Michael, one of the last remaining members of the “Greatest Generation”, passed away peacefully in his sleep on Friday, February 12. Ralph was born on January 17, 1927 in Lavoye, Wyoming to Ralph and Lucille Michael. He graduated from Brea-Olinda High School in 1944 and then enlisted in the U.S. Navy, serving until 1946. He then attended the University of Southern California and earned a degree in Aeronautical Engineering. In 1950, he enlisted in the U.S. Air Force and served as a fighter pilot in the Korean War. His service was cut short due to a devastating plane crash which forced him to spend 18 months in various military hospitals.

In 1952, Ralph married Lita Mae Ledbetter and they raised two boys, Ralph and Mark in Fullerton, California. In 1973 Ralph married Ruth Helm Wilson and moved to Lake Forest, California where they spent the next 26 years until Ruth’s passing in 1999. He and Ruth enjoyed travelling, golf and entertaining friends and family at their lakefront home.

Ralph enjoyed a career in aerodynamic engineering at Northrup-Grumman. His accomplishments included designing the F/A-18 fighter bomber, and he was the Chief Aerodynamic Engineer on the B-2 Stealth Bomber project. He was a true patriot and contributed greatly to the safety and preservation of our nation.

Services will be held on Saturday, February 20th, 2016 at noon at The Church of Jesus Christ of Latter Day Saints Lake Forest, 24755 Trabuco Road, Lake Forest, CA. Viewing at the Church at 10:30. A graveside service will follow at Loma Vista Memorial Park, Fullerton, CA. If desired donations may be made to Vitas Hospice San Diego, Fisher House at Camp Pendleton, or to any charity of your choice.