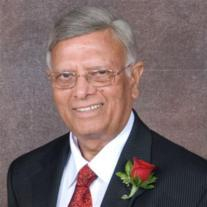 R.C. Khullar was born in Ropar, Punjab, India. He celebrated 44 years of marriage and had two children during that time. He immigrated to the United States in November 1971. After his father passed away in 1972, he took the responsibility for his entire family at a very young age. As a father figure, he helped them accomplish their goals, arrange for the marriages and help them become established in this country. He was the pillar of family unity, which was exemplified by
all of his family members choosing to remain within 15 miles of him, ensuring he would be regularly involved in their lives.

His hobbies included watching Lakers’ games, Bollywood films starring Raj Kapoor, and vacationing around the world with family and friends.

He will be remembered by his family and friends for his hospitality, sense of humor, and devotion to Ma Durga.

He is survived by his wife, two children, and three grand children.